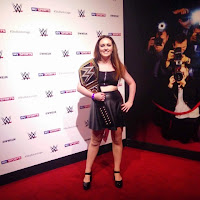 Editor's note: Vanessa usually writes for me over at http://theindycorner.com about her experiences while she embarks on her journey into pro wrestling at the Dropkixx wrestling school but as this was WWE based I thought it was more suited to this site.


So once again WWE comes to the UK and was I lucky to get tickets to go to RAW where I drag the boyfriend who has no interest whatsoever. No fault to him but hey I did not want to go alone and well when boyfriend duties call…

A good set of seats, level 1, row d, so the ring was slightly to the left and the entrances on my right. Now I won’t bore you on here about what happened as it is clear most have caught up on what happened but I’ll just bullet point you a few brief thoughts of mine

• Usos vs Vaudevillians was dead. I feel vaudevillians gimmick won’t work on main roster and Usos aren’t what they used to be.
• Biggest pops went to New Day, Enzo and Cass and AJ Styles
• Really everyone hates Reigns. They brought Fandango out and as they were playing a video promo for Reigns everyone booed like hell then thought it would be better to do the Fandango instead.
• Miz & Maryse would make a brilliant heel power couple. Better than Steph and HHH in my opinion.
• Tyler Breeze will soon be buried. Hes used too much for losing matches and placed on Superstars
• Fandango is really liked over here
• Apollo Crews will go far no doubt.
• I saw Owens vs Ambrose back in Nov 2015 so was weird to see them as the main event again but the match didn’t fail yet again they work so well together in a match
• Somebody give Cesaro and Ambrose some belts yeah!!!
• Womens match was a bit hit and miss. Not enough wrestle time too much going out of ring. But everyone went mad for Bret Hart at Payback. Really Natalya needs the belt then drop to Sasha at Summerslam. Natalya is very underrated.
• Promos on Epico and Primo almost trying to sell me a holiday to Puerto Rico. Maybe a nationality gimmick that will be coming up?

For now I am using the WWE network to watch more classic matches so I can pick up on things more, what do I want to use, how moves should be executed and so on. For Monday RAW it was more watching how promos are executed and how the wrestlers interact with the audience. To me New Day and Enzo & Cass are the best mic workers. New Day are just purely hilarious in any promo. They are all a bunch of firecrackers even when insulting such as taking the mic out of country music. They just do it with the happiness and love. Enzo and Cass have that stereotypical Jersey Shore gimmick and their insults to me come as a new age “Your Momma” jokes. They throw insult followed up with a how you doin! They come across as quick witted that what they say stuns the opponents.

Now relaying back to the Usos and Vaudevillians. Vaudevillians to me have zero crowd interaction. I have not heard them work the mic yet or throw a promo. Just seems like they turn up, wrestle and leave. The Usos used to be the best tag team in the past few years until Jey Uso was placed on injury, they did nothing with Jimmy Uso so everyone just forgot about them so when they turned up everyone was like oh you’re back? In the time they were not used New Day just took over the scene like nothing else.

Now Konnor and Adam Rose have been suspended will they put Viktor with Social Outcasts or just bury Viktor even more? Now I would not want to come out with some X Factor sob story to get people behind me but I would feel to work a crowd I would need them to believe in me. To have reason why I am here and why I will strive for it and become successful. It’s already decided I will be face. But I want my face gimmick to be unique and so far, its proving hard work. So for now the plan is to just have ideas, work them at practice, if it works then carry on, if not then back to drawing board. Though I see cool moves I need the basis of a match to focus on which is chain. Moves like hurricanrana can be done in 3 seconds, I need to bring my match out for at least 10 minutes. Now unfortunately I have the joys of exams for my degree coming up so I would need to pull back for a bit as my education is important to me. So for then just to carry on then when exams over just smash out the training.

For now though please keep up with Dropkixx Wrestling. We now have ring training sessions too! And our upcoming shows: