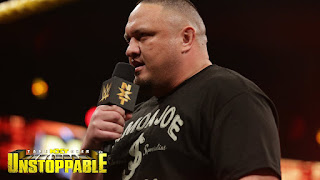 On Wednesday May 20, 2015, WWE's burgeoning third brand NXT held it's latest special, Takeover: Unstoppable. So far none of the NXT Takeover specials have been a disappointment. There was a lot of intrigue heading into this special seeing as both Sami Zayn and Hideo Itami were injured prior to the show. Rumours were also swirling prior to the show that ROH and TNA legend Samoa Joe would be making his presence felt on the show.

Finn Balor vs. Tyler Breeze (#1 Contender's Match)
At this point, we all know that Finn Balor has one of the best entrances in the wrestling world with his demon paint, but Tyler Breeze definitely gave him a run for his money with a WrestleMania worthy entrance of his own complete with models (developmental talent and Sarita/Sarah Stock, formerly of TNA) and a runway. Originally this #1 Contender’s match was set to be a three way, but was made a singles match due to Itami's injury. This was a fun match. A jaw dropping moment occurred when Balor hit a big crossbody onto Breeze who was on the ramp. When the action returned to the ring, Balor finished Breeze off with a Shotgun Kick and the Coupe de Grace.

NXT continues to place an emphasis on their female talent as this was the first of two women's matches on the show. This tag match largely coming about due to the awkward Aussie Emma turning heel, aligning herself with the relative newcomer Dana Brooke and picking on Bayley. While this wasn't a blow away match (it didn't really need to be), all four women were solid. A fair amount of time was spent with Dana and Emma beating on Bayley. Charlotte came into the match and eventually hit her Natural Selection on Emma to pick up the win for her team.

This is the one match that I was lukewarm on. Baron Corbin very clearly is being groomed for big things and it's pretty obvious to see why that is. He's got good size and definitely has a star quality and presence about him, but it feels like there's still something lacking and that he hasn't put it all together yet. Thankfully, there's still time for him to get polished in NXT. Corbin managed to evade a gore and levelled Rhyno with a clothesline before finishing him off with the End of Days.

Enzo & Big Cass make their way down to the ring along with Carmella and the Full Sail crowd totally eat it up. The entrance is so over! This was probably the best in-ring showing from Enzo & Cass yet. Both teams seemed to step things up and bust out spots that we haven't seen from them yet. Blake & Murphy crushed Enzo with a stunning powerbomb/backstabber combo that elicited a ton of sympathy from the crowd. In a moment that was foreshadowed in the episodes leading up to the special, Alexa Bliss interjected herself into the match. When it appeared that Enzo and Cassady were set to win the match, Alexa took out Carmella at ringside. She then tripped up Enzo while he was perched on the top rope. Blake covered Enzo to retain the titles for his team.

Sasha Banks vs. Becky Lynch (NXT Women’s Championship Match)
Sasha and Becky easily had the match of the night. It was also the longest match of the night, but it never once felt like it was dragging on. Both women are extremely technical and were set on wearing down each other's arms. In one of the nastier looking spots of the night, Becky ran Sasha into the ring steps in a way that just looked brutal. Becky went up the top rope, but Sasha took her down and looked on the Bank Statement to pick up the submission victory and retain her title. The women got a well-deserved standing ovation. The women of NXT continue to shine and steal the show. It's no secret that Sasha is star, but this also served as a great showing for Becky Lynch. I wouldn't be surprised at all to see Becky with the title soon.

This was intense. Basically, from the start, Zayn was taking it to Owens. They brawled on the outside and it seemed like the tide was going to turn when Owens went for the apron powerbomb, but Zayn was able to get out of it. Zayn was even able to plant Owens with the Blue Thunder Bomb, but only got a two-count. As the win seemed to be in Zayn's grasp, Owens stopped his momentum with powerbomb onto the ring apron. Referees ran down to check on Zayn, with the match seeming to be a no contest as the ball wasn't rung and no announcement was made for some reason. Despite the referees trying to tend to Zayn, Owens kept attacking which led to Regal running out to subdue Owens. Alas, Owens dropped Regal with a headbutt. Samoa Joe made his debut, walking to the ring and getting in Owens' face. They didn't brawl, but instead had an epic stare down. The show ended with fans chanting for Joe.
Posted by WrestleFigsUK at 07:40