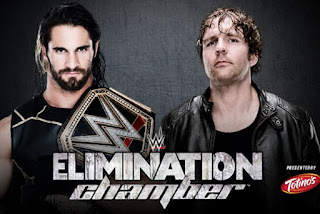 This was a fun little match to get the night kicked off. Both Ryder and Stardust seem to be at interesting stages in their respective careers with Ryder coming off a solid Raw match against Cena and the possibility of Stardust having a match against Arrow star Stephen Amell. Ryder definitely looks to be somewhat reinvigorated as he got his fair share of offense in. Stardust hit the Queen’s Crossbow (his Cross Rhodes rolling cutter) for the win.

The Miz is back. This segment was largely pretty funny. Miz had Summer Rae at his side and brought out Daniel Bryan as his guest. The biggest news that came out of this was Bryan announcing that his career isn't over and that he will be back at some point, though of course, he didn't say when. He also plugged his new book. The Miz kept digging and needling at Bryan which led to Macho Mandow and AxelMania hitting the ring to dispose of the Miz.

The first ever tag team Elimination Chamber match got started off with The Ascension and The Lucha Dragons. New Day managed to interfere when Kalisto found himself perched up on top of their pod. The next team in was Cesaro and Kidd. One of the best spots of the match occurred when Cesaro superplexed Kalisto off the top of a pod. Los Matadores were in next, though they weren't in for long as the Ascension pinned one of the Matadors with the Fall of Man. The Ascension managed to hit the Fall of Man on on Kalisto to eliminate the Lucha Dragons. The Prime Time Players were in next and quickly eliminated Ascension when Darren Young hit his Gut Check on Viktor. All three members of the New Day were in next as the final entrants. In another memorable spot, Kidd, Cesaro & PTP teamed up to hit a 4-on-3 suplex on New Day. Kidd and Cesaro were eliminated after Young rolled up Cesaro. New Day used their numbers advantage to gain the win and pin Titus O'Neil. At times this match felt a little cluttered, but it was a fun opener.
WWE Diva Championship Match: Nikki Bella vs. Naomi vs. Paige

All three women worked hard, though this was definitely clunky. There was a reverse hurricanrana from Naomi to Paige that made me cringe and a few moments when you could tell that the timing was a bit off. As Naomi and Paige were battling it out on the top rope, Nikki came in and turned it into a tower of doom. Nikki looked set to pick up the win over Paige with the Rack Attack, but Naomi stopped her with the Rear View. Ultimately, Nikki was able to hit the Rack Attack on Naomi to retain her title. I've been enjoying Naomi's heel work as of late and expected her to win the title, but that could always happen down the road.
Champion vs. Champion Match: Kevin Owens vs. John Cena

Owens is out first and gets a pretty decent reaction. Cena follows to a warm reception than he usually gets with more cheers than boos. Owens largely dominated the early goings of the match. He went for the pop-up powerbomb, but Cena was able to get out of it and hit a big shoulder block to regain control. Cena went for the AA, but Owens managed to hit the pop-up powerbomb for a two count. Cena busted out some big moves; a Tornado DDT, the STF, the springboard stunner and top rope legdrop, but none were able to keep Owens down for the count. Cena leveled Owens with two big clotheslines. Owens ducked another clothesline attempt and hit the pop up powerbomb to pick up the clean win. Post-match, Owens grabbed a microphone, addressed the crowd and talked up his big win. It's very clear that Owens' time is now. Heading into the show, there was a ton of speculation among fans as to how the finish would go win and I don't think any of us were expecting a clean win. This was easily the match of the night.

This match was in a tough spot having to follow the Cena vs. Owens match. If anything this match just further drove home how important NXT has become as Bo and Neville are both former NXT champions. Neville hit a moonsault from the top rope onto a prone Bo Dallas on the floor in a moment that perfectly showed off his high flying arsenal. Bo was able to recover and mount an attack, but the Neville was able to hit the Red Arrow to win the match.

The match got kicked off with Ziggler and Barrett. R-Truth was in next and Barrett immediately honed in on him. Barrett rammed Ziggler into Mark Henry's pod door in an attempt to taunt the World's Strongest Man,but that broke the pod door and Henry was now in the match. Ryback was in next. Barrett was the first eliminated after taking a superkick from Ziggler, Snake Eyes from Ryback and Lie Detector from R-Truth. Ryback Shellshocked R-Truth to eliminate him from the match. Sheamus hit a Brogue Kick on Henry to take him out. The Celtic Warrior was able to Brogue Kick Ziggler and pinned him. Sheamus and Ryback battled it out as they were the final two. In a nasty moment, Sheamus leveled Ryback with the White Noise on the steel grate. Ryback was able to gain momentum and Shell Shocked Sheamus to win the match. Daniel Bryan presented Ryback with the Intercontinental Championship. He led the crowd in a 'Yes!' chant and shook hands with Ryback. This match was a mess. It's funny, neither of the Chamber matches stole the show.
WWE World Heavyweight Championship Match: Seth Rollins vs. Dean Ambrose

After the bell rings, we get an intense stare down between Rollins and Ambrose. At one point, Ambrose went for a bulldog on Rollins, but Mercury stepped in to pull Rollins out to the floor. Ambrose did a sweet suicide dive that drove himself and Rollins over the broadcast table. Later on, the Lunatic Fringe thwarted Kane and J&J Security as they attempted to interfere. Ambrose went to the top rope and hit a big dive onto Kane and J&J Security. The referee was taken out as he was hit when Ambrose went for another top rope elbow. Ambrose hit Dirty Deeds on Rollins and had him pinned, though of course, there was no ref to make the count. A second referee came out from the back and counted the pin.

As Ambrose was celebrating with the title, the original ref recovered. The second referee informed Lilian that the match was ruled a DQ. Ambrose had won the match, but not the title. Noble, Mercury and Kane attack, but Roman Reigns ran out to make the save. Reigns cleaned house and Ambrose tossed Rollins over the top and to the outside. Ambrose grabs a microphone and tells that the crowd that since he won the match, he's taking the title with him. The show goes off the air with Ambrose and Reigns celebrating in the crowd and Rollins screaming for his title to be given back. Surprisingly, I really wasn't disappointed at all about the Dusty Finish and I'm intrigued to see how this will play out on Raw.
Posted by WrestleFigsUK at 09:55