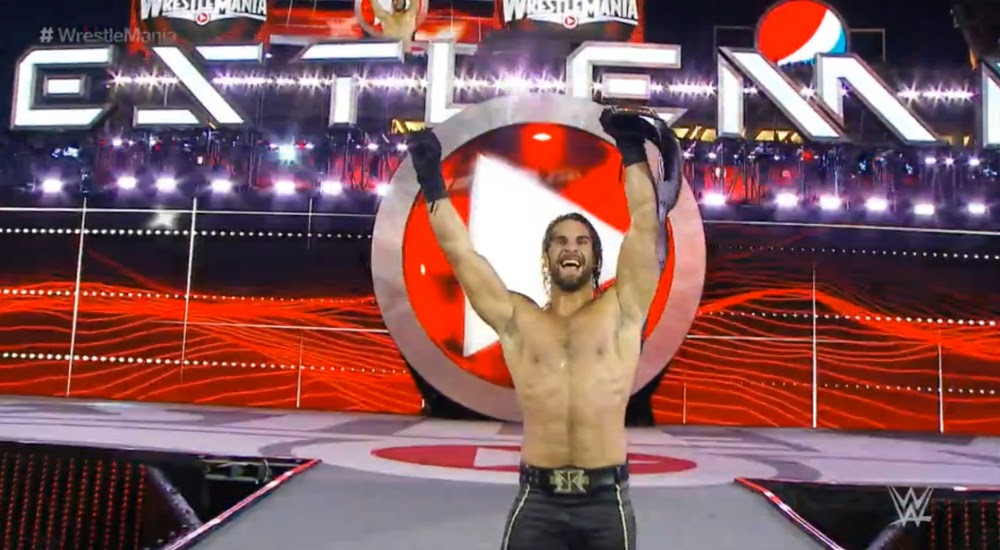 This past Sunday, the WWE put on their biggest show of the year. Wrestle mania 31, the ‘Showcase of the Immortals’. There seemed to be a general consensus among fans online that the build up to this year’s Mania was a little underwhelming. Fortunately, this year’s Wrestle mania delivered. There was great in-ring action, elaborate entrances and tons of star power.

Kidd & Cesar vs. The Usos vs. Los Matadores vs. New Day

The first match on the Wrestlemania 31 pre-show was the fatal four-way tag match for the WWE Tag Team Championship. This was a great choice to start the night as it was wild and fast paced. All four teams were accompanied by a manager and they all got involved at various points in the match with a highlight being when Natalya managed to lock El Torito in a Sharpshooter. Cesaro got the win by pinning Big E.

The next match of the night was the 30-man Andre the Giant Memorial Battle Royal. This was a fun match and an opportunity for a lot of the guys to take part in Wrestlemania. Ryback, Cesaro, Big Show, The Miz and Mizdow all stood out and were the final five competitors in the match. In the moment we were all waiting for, Mizdow eliminated The Miz. Alas, Big Show would go on to toss Mizdow out of the ring to win the battle royal.

In the match that kicked off the main card, we saw Bad News Barrett, Daniel Bryan, Dean Ambrose, Dolph Ziggler, Stardust, Luke Harper and R-Truth battle it out in a ladder match for the IC Championship. This match was chaotic. In easily the most sickening spot of the match, Ambrose was powerbombed through a ladder by Harper. Bryan and Ziggler engaged in a head butt war with Bryan coming out on top. Ultimately, Bryan ascended the ladder, pulled the belt down and became the new IC Champion. Here’s to hoping we see the WWE do more with the title going forward.

It felt like it got off to a slow start, but it definitely picked up. The New Stooges aka J&J Security got involved in the match, which led to Orton hitting them with a double DDT. The most spectacular moment of the match was the finish. Rollins had Orton in place for the Curb Stomp, but Orton was able to launch him into the air and hit the RKO for the win. Not a show stealing match, but very solid.

First things first, the entrances for this match were top notch. Sting was played in by a troupe of live drummers and Triple H did his best Terminator homage. Not a technical masterpiece, but I don’t think anyone expected that it would be. The match broke down into the ‘Best of the Monday Night War’ as there was interference from both DX and the nWo. In a bizarre moment, Triple H went to hit Sting with his sledgehammer, but Sting blocked it with his bat. Sting then swung the bat and broke Triple H’s signature weapon in two. After Sting went for another Stinger Splash, Triple H hit with him with the sledgehammer and picked up the victory. After the match, Triple H and Sting shook hands.

The Bella Twins vs. Paige and AJ Lee

After the #GiveDivasAChance movement took off, I hoped the women in this match would be given the time to really shine, but that was not to be. This match lasted just under seven minutes. Despite the crows being noticeably quiet for a lot of the match, all four women worked hard. The finish came when AJ Lee got Nikki Bella in the Black Widow to pick up the submission victory.

In possibly the best entrance of the night, Rusev made his way out to the ring riding a tank. He was also accompanied by Lana, who was absent the past few weeks as she was filming a WWE film alongside Edge. This was a really fun match with some great near falls. Towards the end of the match, Lana got up on the ring apron to distract Cena. Rusev charged at Cena, though Cena moved. Rusev crashed right into Lana and she went down off the apron. Cena then hit an Attitude Adjustment for the win; picking up the U.S. Championship and snapping Rusev’s undefeated streak. The crowd was into this match and it was a great showing for both guys. It’ll be interesting to see where Rusev and Lana both go from here.

After Rusev vs. Cena, Triple H and Stephanie McMahon were in the ring. The Authority plugged the network and touted that they had set a new record for Levi’s Stadium with an attendance of 76,976. Triple H and Steph boasted about how great they are and that they owned Sting, the Superstars and the people. This led to The Rock’s music hitting and he made his way down to the ring. The Rock, fresh off hosting SNL, jaw jacked with the Authority. After Stephanie slapped him, Rock brought UFC’s Ronda Rousey into the ring.

The exchange between Ronda and the Billion Dollar Princess was gold. Triple H and The Rock started going at it, which got Ronda and Stephanie involved too. Ronda getting her moments to shine by delivering a Judo hip toss to Triple H and threatening to snap Steph’s arm. The crowd ate this up. We definitely haven’t seen the last of Ronda Rousey in the WWE.

The Undertaker looked so much better than he did last year. He appeared to be much stronger and healthy. Wyatt had Taker in position for Sister Abigail, but Taker was able to fight out of it and he hit a Tombstone on the Eater of Worlds. Wyatt and Taker worked quite well together and at no point in the match did it look like Taker was in a bad way. While it certainly wasn’t on the same level as some of the Undertaker’s past Wrestlemania classics, it was a solid outing and served as vehicle for the Deadman to bounce back from last year’s loss to Lesnar.

The final match of the night and probably the match that raised the most curiosity among the fans didn’t disappoint. Lesnar got things started with a German suplex right away. As Lesnar was destroying Reigns, he uttered the words “Suplex city, bitch”. While everyone was worried about how Reigns would fare in the main event of the WWE’s biggest show, he put on an amazing comeback. His signature moves all looked believable. Rollins ran down to the ring with the Money in the Bank briefcase. He let it be known that he was cashing in and the match was restarted. Lesnar had Rollins up for an F5, but Reigns speared Lesnar. Rollins hit the Curb Stomp on Reigns and pinned him to become the new WWE World Heavyweight Champion. It was a good call to have Rollins get the title without having Lesnar lose. Lesnar stays protected, Reigns gets to look strong in defeat and Rollins is the slimy champion that we all need.
Posted by WrestleFigsUK at 06:19