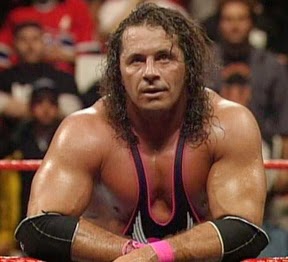 So the Montreal screw job was years ago but it always rears it's ugly head every now and then. When it first happened I was always on the side of Bret. The reasoning people give for Vince screwing Bret was for the fact he couldn't take the risk of Bret turning up on WCW TV with his world heavyweight championship title belt. Now, as I said I was always on the side of Bret in this situation, yes Bret took his character too serious but the way I looked at it, the fact he had been given creative control for the last month or so of his contract he should of been allowed within reason, to choose how he bowed out of the WWF and how he dropped his title.

Now the reson for me bring this whole situation up was I always said, Vince didn't need to screw Bret in that way because Bret had more intergrity than to turn up on WCW TV with the WWF championship belt. However, people were saying like with Madusa beforehand, Eric Bischoff would ask/tell Bret to bring the belt with him but just today, Chris Jericho's latest podcast, which was recorded in January was a sit down discussion between Bischoff & Bruce Pritchard with Jericho as the compare about the Monday Night Wars and during the chat, Bischoff actually said Bret asked him "what do you want me to do with the belt, do you want me to bring it with me"? Bischoff, going by what he has said himself,  told Bret as WCW were involved in litigation with the WWF at the time that in now way would he want the WWF title on WCW TV.

Of course, Bischoff could be lying but would he really lie about something this? Unless I have missed something, I have never heard this story before if anyone has, please let me know and either way, for those that felt bad for Bret, does knowing this now change your opinion of Bret and thus look back and realise Vince may of actually done the right thing?

I look forward to hearing from you if you have any thoughts, hit me up via twitter @WLHSTU