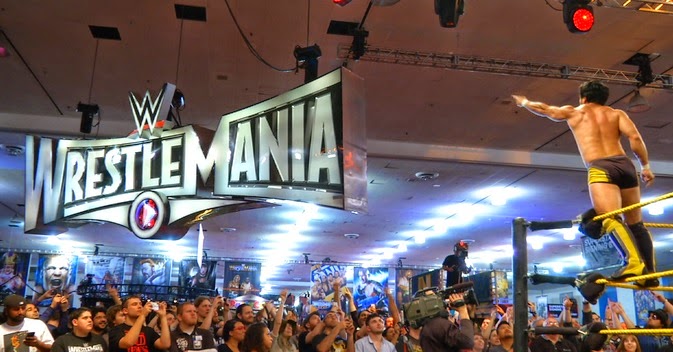 The April 8th episode of NXT was a look back at the action that took place at Axxess during the Wrestlemania 31 weekend. This episode was centered mainly on the tournament to earn a spot in the 2nd Annual Andre the Giant Memorial Battle Royal and showing clips of the NXT talent interacting with the fans and signing autographs. The matches were held in a convention hall, which is quite different from the Full Sail University setting that we’re used to. Given that this show featured just the tournament matches, it was little disappointing to not see the wonderful women of NXT.  A video package showed clips and highlights from the first round of the tournament which saw Finn Bálor defeating Baron Corbin, Tyler Breeze defeating Bull Dempsey, Hideo Itami defeating Jason Jordan and Adrian Neville defeating Kalisto.

This match got started off with some really fun back and forth action. It was clear through his actions that Neville was working as the heel in this match. At one point, Itami had Neville in place for the GTS. The crowd was going wild and chanting for it, but Neville was able to slip out. Towards the end of the match, Itami was able to move out of the way when Neville went for the Red Arrow. The finish came when Itami hit Neville with the Shotgun Kick.

This was a fairly solid 5 minute match. Not enough time to really blow anyone away. Bálor mocked Breeze’s preening and posing. The tide turned and Breeze was able to ground Bálor with a chinlock. Bálor picked up the win after crushing Breeze with the Coup de Grace stomp.

The crowd was behind this match right from the start as they were already chanting “This is wrestling” when the match was barely underway. Itami lifted Bálor for the GTS, but Bálor slipped out. A bit later, both guys went down after collided. Both men were back up to their feet at the seven count. Itami connected with his hesitation dropkick and went for the Shotgun Kick, but Bálor was able to hit the Slingblade. Itami had Bálor up for the GTS, but Bálor got free. Both guys would battle it out some more before Itami levelled Bálor with the Shotgun Kick.

The show closed out with a superb Hideo Itami video package. We got a flashback to the announcement in Japan of his signing with the WWE. A glimpse of Hideo as a loving father was shown as we got to see him interacting with his two sons. For fans that have been dying to see Itami use the GTS, they threw in a clip of him hitting it on Breeze at NXT’s San Jose State University show. They then followed Itami to Wrestlemania and we got to see him chatting backstage with Sami Zayn and Seth Rollins. If you all watched the Wrestlemania 31 pre-show, you know that Itami was ultimately eliminated by Big Show and that was shown as well.