Another Note on Booking By Adam Timmins (@AdamTimmins83) 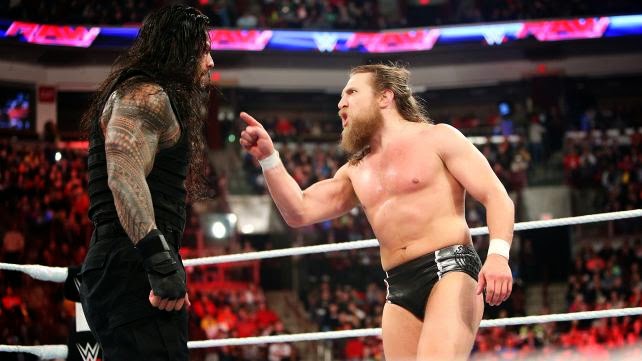 So I dashed off a less-than-200-word piece on Monday, emailed it to Stuart, and didn’t really give it much thought, but apparently it created quite a stir when it when was shared; some of it over the fact I called Brian Danielson, er, Brian Danielson. To avoid bringing Gottlieb Frege into things, I’ll refer to him as Daniel Bryan from hereon in.

A couple of points came up after I wrote the original note which I wanted to address. I remember thinking last year when the whole Bryan/ Wrestlemania thing was playing out that it was a funny old world when a wrestling company has a guy who’s massively over and it’s a real problem. And history has repeated itself this year in terms of the problem of Bryan’s popularity; except that where the Fed acceded to fans wishes last year, this year it’s tough love.

Of course, the incongruous word in that sentence is ‘wrestling company’. Naturally for years the Fed has been referring to what it does as sports entertainment; but I always just rolled my eyes and thought “it features wrestlers, in a wrestling ring, having wrestling matches – it’s wrestling.” But when you reach the point we have now; where wrestlers are actually being punished for getting over (I’m thinking of Ryder here); or at the very least being held back even though you’re doing what you’re ultimately supposed to do as a wrestler – then they’re right – it’s not wrestling. When you reach a point where you’re violating the fundamental norm or rule of what is supposed to guide you, then whatever you’re doing becomes something else. So in a sense, Vince has now achieved what presumably he thought he’d done years ago – that is, created sports entertainment.

The other point someone made to me on Monday night was that it’s not just Bryan who’s been subordinated to Roman Reigns at Wrestlemania; John Cena finds himself scrabbling around in the mid-card for the first time in ten years or so. Generally I refrain from commenting on Cena, on the basis that no-one can agree on anything said about; the debate about Cena wallows in the sort of fragmented chaos that the historiography of the French revolution once did. Ultimately though, the difference between the current predicaments of Cena and Bryan is that on the eve of Mania Cena could squat down, defecate in his hand, and hurl it in Vince’s  face; and still be guaranteed a decent post-Mania push. Bryan, I suspect, has to tread a bit more carefully.

I’m probably going to get hammered for referring to the French revolution here [you pretentious twat –Ed.], so I might as well finish with another historical comparison. In the twenty years or so prior to the Russian revolution, everyone knew that Russia was a mess internally, and that a revolution would happen sooner or later – indeed, there was an aborted effort in 1905. Of course, no-one knew the form that it would take, but it was bound to happen. It strikes me we’re in a similar situation with the WWE; indeed, we could take the Russian analogy further – an out of touch, autocratic leader is currently heading up a tottering empire. It’s unlikely however, that Vince will be overthrown by an uprising from below. It’s generally accepted though, that change won’t occur until Vince is gone (i.e. dies). And that will happen at some point, but no-one knows when. But until then, it’s a case of just marking time….
Posted by WrestleFigsUK at 23:19