Sometimes things happen in wrestling that you want to comment on but don't want to write a full blog and dissect the story fully. The following are examples of that. 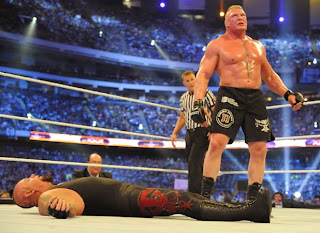 This of course was a major story at least for 48 hours when something more important came along but it inspired quite the response from some fans. In my WrestleMania predictions, I like everyone else expected Brock to fail and was surprised to see him end the streak.

Personally I don't think he was the best person to do it, I would have preferred it to have been a full-time member of the roster and ideally someone who is on the raise and would have greatly benefitted from claiming a legendary win.

But who knows if the Undertaker has anymore years left in him, if he had won then the overwhelming feeling would have been that it was a disappointing match. Instead at least we got one of the great wrestling promos from Paul Heyman the following night on Raw.

It wasn't helped by the fact that some fans thought the finish was botched as the referee apparently didn't know Brock was winning, the bell didn't ring straight away and there was also a delay in playing Brock's music which added to the confusion.

Still it's hard to imagine that the Undertaker would have been forced to lose, infact it's highly likely that he actually chose to lose to Lesnar with the thought process being that if he had to lose to someone it might as well be someone who he saw as a real fighter.

To see other fans taking a rather more passionate or disturbing reaction, I'd recommend that you check out these two videos.

They say that imitation is the sincerest form of flattery, then Eric Young's title victory indicates that TNA probably sees Daniel Bryan's WWE World Title win as the greatest moment in wrestling history.

To me it's hard to see why Eric was put in this position unless it was because he looks the closest to Daniel Bryan and was well positioned as the company leading underdog.

What TNA don't understand is that Daniel Bryan has been a main eventer and pushed solidly as one for pretty much 8 months straight. He was far and away the most popular wrestler in the WWE adored by the fanbase and battling for the WWE Title and the top company heels.

Finally at the biggest wrestling show of the year, he had his crowning moment. Firstly beating Triple H clean thus proving beyond doubt that he was an A+ player and then winning the main event to become the WWE World Champion. A fitting end to a somewhat frustrating story, but in the end the hero got what he fought for and deserved. The bad guys thwarted.

Eric Young's story is somewhat different, for months at a time he was nowhere to be seen on television. When he does make an appearance it was usually as a comedy figure and the last title he held was as one half the Knockouts Tag Team champions with ODB.

He was used as the inspiration to move the Joseph Park character back to Abyss, but with Abyss turning heel at Lockdown to help Magnus beat Samoa Joe it seemed EY would again disappear from view. When he didn't it appeared that he was there to lose the fall.

Just like Daniel Bryan he was booked into a match that he had to win to earn the right to challenge for the TNA title. Once there he also was victorious but the fans hadn't been on a several month journey with him, they were not emotionally invested in his quest. Truth be told they probably didn't know he was with the company six months ago or even care.

TNA seem in a really bad place, nothing seems to make sense and although it's not quite as bad as the final few months of WCW. The idea that you can realistically compare Eric Young's TNA title win to David Arquette's WCW World title win is not completely foolish. They were both clear signs of the company's desperation. 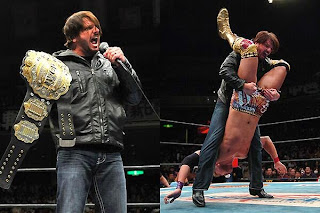 AJ Styles made his New Japan debut (as a member of the NJPW roster) at the Invasion Attack show, where he attacked the current champion, Kazuchika Okada. There was very little reaction from the 8500 fans in attendance.

Styles has since been officially added to the Bullet Club, seemingly as a ready made replacement for Prince Devitt who turned babyface but is almost guaranteed to be leaving NJPW. Styles is not the new leader, that position has gone to Karl Anderson.

Styles has basically said that he sees Okada as a 'young boy' and that he was nothing in TNA and he doesn't think much of him now either. It's not the worst idea, but do NJPW fans care what Okada did or didn't do in TNA. In any case the fact he was never used looks badly on TNA rather than Okada.

There seems to be considerably belief that Styles will win when he challenges for the IWGP title, as they want him to be a big star in Japan. Personally I don't see it that way, I'm not convinced that the fans see AJ Styles as somewhere who can be the IWGP Champion at least not yet.

There is also the very slow tease of a match between CHAOS members Okada and newly crowned I-C champion Shinsuke Nakamura stemming from Nakamura's decision to challenge Hiroshi Tanahashi for the I-C title rather than his stable mate for the IWGP title. That without doubt is the biggest match NJPW has on the cards and it would be even bigger if it was Title vs. Title.

I think that match would be hurt if Okada loses the title to Styles even if he was to regain it quickly, although his current reign is now over a year long there doesn't seem to be any backlash against him and there are still big matches to have. A title loss to AJ Styles does not make sense at least not to me.
Posted by WrestleFigsUK at 09:24