SADERMANIA: From Fanship To Friendship Review By Matt Bayliss 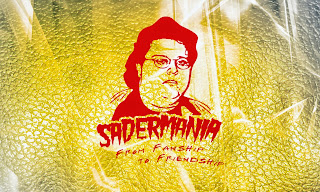 MOVING and INSPIRATIONAL two words which quite succinctly sum up this documentary! Sadermania is the story of Chris Sader from Chicago, son of Polish immigrants who developed an obsession with Hulk Hogan from the age of 3 when he first saw him on TV.

This documentary tells the story of how one child’s obsession with Hulkamania has shaped his life all the way to adulthood, and how he came to be friends with his idol. Inspired by Hulk Hogan, Sader has become a wrestler himself despite some criticism as he does not have the look or physique expected by some. The story of Saders life is told alongside a storyline feud within CSW the wrestling promotion for whom Sader performs.

Hulk Hogan himself appears in the film, talking frankly and honestly about how he got to know this super fan and the relationship they forged. Sader always presented piles of pictures and magazines to get signed but always wanted them personalised to him so it was obvious early on that he was not trying to profit from it. Hogans retelling of the events alongside Saders own memories and contributions from family and friends really adds depth to what is essentially a fairy tale story. Jimmy Hart and “Hacksaw” Jim Duggan also appear in the film and talk about how they know Chris.

In my notes I took whilst watching the documentary I plotted a timeline of key events but when I sat down to write I felt that rather than state everything that happens my focus should be to encourage you to go and watch and experience it for yourself.

In order to meet his hero Sader has travelled all over the United States, waiting around for his opportunity to come up. Through his dedication and commitment he began to get recognised by Hogan and finally after travelling down to Tampa to Hogans restaurant Sader got invited to Hogans home and the two developed an unlikely friendship.

The CSW story line that plays out through the film is very interesting and shows some good story telling and Chris, although he does not look like the typical wrestler contributes a lot to the action that takes place and has developed a really strong character. The heel in the piece, Austin Roberts, has a great look and seriously intense personality so not only does he work incredibly well opposite Sader he is definitely somebody, as a wrestling fan, I would be interested in seeing more of as a performer. Chris clearly works hard for his character and puts in a lot of effort to improve himself, his in ring work is impressive and the crowds seem to love him. Just watching the action unfold helps you really invest in “Sadermania” – Chris is an underdog and comes across as just a normal guy but fights for what he believes in, something that is a staple of good characterisation and storytelling within wrestling.

In addition to the interview contributions and the wrestling footage some of the stories told are presented with some comic strip drawings which are good and add an extra dimension instead of simply listening to people tell stories.

Both Chris and Hogan experience some personal losses and an important part of the story is how their relationship with one another allows them to help and guide one another through darker times, both coming out stronger on the other side. Faith and religion are important to both men and they discuss openly how this affects and influences them. While personally I am not really religious I still found it very moving to listen to how their friendship grew through shared beliefs and experiences.

Sader has converted the entire basement of his family home into a Hulkamania museum, he has practically everything that has ever been produced with Hogan on it, from what is shown in the film the collection is amazing and he has managed to get some incredibly unique items from all through Hogans career. Almost every item has been signed and personalised to Chris which makes the collection even more unique and special.

Hogans contribution to the film really impressed me and made me see him in a very different light, he was very open about his relationship with Chris and how they both helped each other through losses and shared an emotional journey together. This has certainly made me more of a fan of Hulk than I was before; I think any wrestling fan would love to think that they could have this kind of rapport with their favourite star.

As I said right at the very top, this is really moving and inspirational. Chris Sader has been able to live out the fantasy of any members of any fandom, not just to meet his hero and idol and mould his life around it but to actually develop a legitimate friendship – how many people have had their idol visit their home? Or drive them around your home town in your own car? If this story was told as fiction it would be fantastical and far-fetched so to know that this is true makes it even more inspirational and shows that commitment and devotion can actually help you achieve your dreams.

Check out the trailer below