One Warrior Reality By Pete Stevens 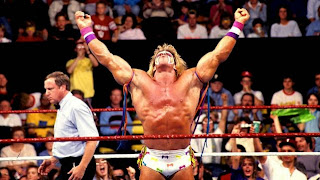 Being woken up by my brother at 7am Wednesday morning on my first day off in 6 days wasn't my idea of a wake up call. He had neither a cup of coffee or a bacon sandwich however, what he did have woke me up more than an entire pig and a handful of coffee beans could ever do. He told me Ultimate Warrior was dead.

James Brian Hellwig known later in life simply as Warrior, had died. Let me take you back to the part where I was hearing this at 7AM. I wasn't drunk but that was one hell of a sobering moment. Only 2 days before Warrior, I stand corrected 'Ultimate' Warrior came out on to the Hall of Fame stage. A WWE stage, to accept his induction into the WWE Hall Of Fame for class 2014. I witnessed him being the entrance themed final Inductee onto the stage actually at Wrestle Mania XXX for their HOF presentation. I SAW him on Monday Night Freaking Raw! This can't be real. Alas I'm wrong and it is real. All TOO real.

Tuesday April 8th 2014, just 48 hours removed from his Hall Of Fame induction and less than 24 hours removed from his appearance on Raw, Ultimate Warrior had died. I had a number of important things to do that day. One was a telephone job interview & the other being a staff meeting that me and my manager were hosting. All I have managed to think about all day is how all this could of happened. We all know the history and the connection of warrior to the quick argument linking him to drugs and performance enhancers and i'd be the first one to agree with you but you see its deeper than that. This is a man that walked out on to that stage Saturday, Sunday & Monday to great applause and rapture from the crowds for which I know he took personally as it was visible for the world to see yet Tuesday he is gone?

I never claimed to be the biggest Warrior fan and nor would I put any of his matches in my top 100 contests of all time but he was important to professional wrestling. As a child growing up I collected the action figures. I needed Ultimate Warrior because without him who was Hulk Hogan going to wrestle for the belt? As I grew up, so did Warriors reputation for being a brash, difficult & a down right piece of work who once held the WWE hostage for money. Think of other people in this situation, the Jeff Jarrett's of this world who did the same thing for their own gain, only as I grew older something changed.

As I got older still and into adulthood I used to notice Warrior more and more, popping up on YouTube here and there as well as conventions or things he posted himself. I heard all the rumors about him still being difficult to work with & still being an ass from time to time but I started to look at it from a different perspective. I looked at it from the perspective of a guy who was extremely passionate about who he was, how he was perceived in his chosen line of work and his lifestyle choices. Don't get me wrong he still came across a little nutty but through it all I saw the method in the Madness. I'm a retail manager in a fast past sales environment. If I had just ONE warrior working for me, my store would be a much better place.

He believed and now so do I.

Being confused by someone for how they operate doesn't make them anything other than me or you. Warrior exemplified the spirit that more people need in this life, Individuality, pride, ownership, passion & determination to name just a few. He was ridiculed for most of his working and post career because of a combination of all these characteristics but like most things in life you never know a good thing till its gone.

I once read a great quote whiich is, "Each Man Is The Architect of His Own Destiny". No one in my opinion exemplifies this more then Warrior. Like I said earlier, I've never been a big fan of his ring style or work but the man has left an indelible mark on my within the past 72 hours which is no matter what you do, how hard you work, how passionate you are or how much you love, there comes a time in every mans life when it all comes to an end. Sometimes its sudden & sometimes its not but one thing is for sure, if you don't do any of those things whilst above all staying true to yourself, before you know it you're time will come to sudden stop and you will have done nothing.

I don't fear for the people surviving Warrior. I don't worry how his two daughters will cope without their father. I feel bad but need not worry, for they will live the way of the Warrior with the knowledge and mindset laid out to them by there truly remarkable father.

Pete.
Posted by WrestleFigsUK at 10:59