On the Road to Summer Slam By Shaun Nichols 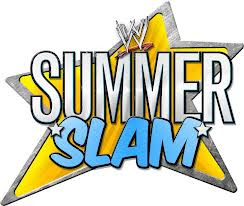 The biggest show of the Summer is well on its way and it seems a good time to preview the show and the matches that have already been announced,

CM Punk vs. Brock Lesnar
From a fan interest point of view and also from a coherent storyline basis, this is the main event of SummerSlam. Although of course the feud is essentially between former best friends, CM Punk and Paul Heyman. With Punk vowing that he will destroy his former manager, Heyman for his part is sending his 'hired beast' to stop him.

The great thing about the feud is that Punk and especially Heyman are so great in their respective roles and can justify in their promos why they feel and act as they do. Brock is essentially the third wheel in this programme but I don't see that as any kind of negative, he makes rare appearances so until he and Heyman splits it's difficult for him to play the central role. It works great that Brock plays the role of Heyman's monster that Paul is sending to hurt CM Punk.

Although Punk should win in the end, as the heroic babyface overcoming overwhelming odds to win it doesn't make sense for him to win right at the start. You also have to consider that Brock is still a PPV mover and any losses he has should be used judicially. I expect a very good match with Brock winning which allows the Punk vs. Heyman feud to continue throughout the rest of 2013.

John Cena vs. Daniel Bryan
We are getting a pretty rare 'face vs. face' main event, and they are going to be using the Total Divas show to 'add interest'. They are both dating a Bella, with the storyline being that Bryan is considering marriage while Cena has no interest in doing so.

Outside of that, the WWE booking has finally woken upto the fact that a large part of their fan base wants to support Daniel Bryan. They have dropped all talk of being the 'weak link' which made him sound like a complaining heel and have instead have switched attention to having Bryan proving he belongs which worked great at the recent Raw when he wrestled Swagger, Cesaro and finally Ryback in a gauntlet series.

The hardcore fans will obviously be behind Bryan, so expect a lot of boos for Mr Cena. I think that we may get a Daniel Bryan win, which will be quickly followed by Randy Orton cashing in his MITB briefcase and turning heel and leaving as WWE Champion.

Alberto Del Rio vs. Christian
Let me just say that I like Del Rio as wrestler, he works well and has good matches but nobody cares about him. It hasn't helped that he's been without Ricardo (due to a Wellness violation) but you have to face facts that very few people react to his entrance or his interviews. The good news is that Ricardo should be back for SummerSlam but honestly he can't make that much difference.
Christian is pretty similar, he is a really good wrestler and has lots of good matches but the fans don't really care that much. He's hindered by the fact he's never been booked very strongly as a singles and when he did win a big match such as winning the World Title against Randy Orton in 2011 it wasn't because he pinned him but that Randy got himself DQ'd in a match where the title changed hands on a DQ finish.

Christian also hasn't had much interview time, so him challenging for the title seems a little bit out of nowhere. JBL on commentary has mentioned that Christian wants 'one more match' for the title but that's pretty weak as a storyline. I think they will have a very good match that people will get into eventually that sees Del Rio win, Christian will then quickly disappear from the title picture.

Dolph Ziggler vs. Big E Langston
This at least as a storyline to follow, Ziggler badly needs a win after losing at Payback and the Money In The Bank events. He also needs to drop the gimmick that he athletically avoids being attacked by incompetent heels, however clever the WWE thinks this is. The fans only see this as a guy they want to cheer running away from his opponents.

Langston doesn't need to win, he just needs to look competitive and his offence to be effective. This shouldn't be an issue as Ziggler will bump like crazy for him. But as it stands the money is with Ziggler and I can't see him leaving LA without picking up the win.

Damien Sandow vs. Cody Rhodes
The former partners battling over Smackdown's MITB briefcase. From a wrestling standpoint, Cody is clearly the better wrestler but is somewhat lacking in personality in front of most live crowds.

Sandow has the stronger personality and is able to connect better with the fans in attendance but isn't much of a worker.

So their match will depend on what the WWE booking team wants from the MITB case holder, it's frankly difficult to see either challenging or actually becoming World Heavyweight Champion in the near future. But I can see there being some entertainment in the 'Intellectual Saviour' cashing in the case and somehow failing. His character actively encourages the fans to laugh at his failures, Cody overall doesn't encourage much of a reaction at all. On that basis, expect Sandow to reclaim his MITB briefcase.

Bray Wyatt vs. Kane
The WWE have done a pretty good job of introducing the Wyatt Family and having their fans treat them as a serious act. Kane at this point is someone who's position on the card that doesn't depend on if he wins or loses.

Wyatt on the other hand will need to win in his first major singles PPV match. A loss here would badly hurt the Wyatt Family and could seriously send them straight to becoming an opening card attraction. Expect a Wyatt victory through outside interference.

The Shield vs. Mark Henry & Big Show
This hasn't been announced yet but seems likely. This could be interesting as there is a suggestion that Seth Rollins has heat over an handshake with the Big Show (was he not aware of the issue between the Young Bucks and Booker T?).

The Shield have been somewhat downgraded in recent weeks since they won the US Title and Tag Titles at Payback but have still won most of their matches. A defeat against resident monsters Henry and Show arguably wouldn't be a disaster, but looking at things rationally they are the future of the WWE and they also have a 3 on 2 advantage.

Big Show and Mark Henry are in similar position to Kane, they have history and longevity on their side. If they win it's difficult to see where the win would actually take them, if they lose then it was in an handicap match so it doesn't hurt them at all. If The Shield don't win then I would start to worry about how the WWE see their future.
Posted by WrestleFigsUK at 13:51