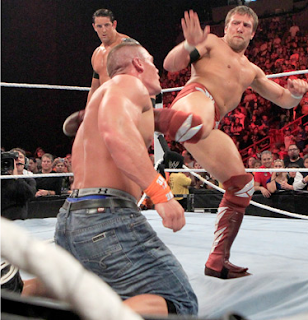 Right, so on Monday June 7th the WWE did a 3 hr 'Viewer's Choice' show which the short of it was the viewers 'picked' oppenents for wrestlers etc. The show was pretty dire this was however until the last segment, John Cena was facing CM Punk and then the NXT season 1 roster came down to the ring and proceeded to attack Cena, this attack was being led by Season 1 winner Wade Barrett. Cena took a pretty good beatdown, Punk even attempted to help Cena despite being a heel but he also was beaten down. The NXT guys didn't leave it there, other than wrecking the RAW set, they also attacked WWE staff members at ringside and this included Bryan Danielson giving ring announcer Justin Roberts one hell of a kicking. This is not that abnormal if there is a heel group causing havoc but one of the things that Danielson did was use Roberts' own neck tie to choke him out. This was zoomed in on by the camera man which of course got his directions from the show director.
(Here is a Youtube link to the attack)http://www.youtube.com/watch?v=mtSA-lhvvPM
As the days passed, the internet was buzzing with this 'shoot' style angle and the NXT guys even went on to do a similar type of angle down in FCW in Florida with the NXT S1 guys attacking The Miz and Christian. (Here is a Youtube link to the FCW angle - http://www.youtube.com/watch?v=bRvq3cJOsNA)
WWE was getting a lot of heat from numerous sources, sponsors etc. the likes of Mattel who produce the current range of WWE action figures and also, with the show being TVPG, this was deemed too violent and as Danielson was choking Roberts it was even more frowned upon following what happened with Chris Benoit.

On Friday June 11th, WWE announced that because of what had happened, Bryan Danielson had been fired from the WWE, apparently by Vince McMahon himself. At first, everyone thought it was an angle as this is pro-wrestling and that's what pro-wrestling does but it seems it's legit and Danielson is gone from WWE. Now, I think he may well very be brought back to the comapny in some months time but that is not certain. Like when most WWE stars get released from their contracts, Danielson has a 90 day no compete clause which basically means he can't work for TNA wrestling but he has been asking around for indy bookings.

I feel for Bryan, I know I didn't want him to go to WWE in the first place for selfish reasons, i wanted him to stay in ROH and work for PWG but I understand that this is Bryan's livelyhood and he is in the business to make money and WWE would get him plenty of that and world wide exposure but that was all taken away on June 11th 2010. The question that is being asked by many, how did the camera man keep his job for zooming in on the choking of Roberts, how did the director for allowing this? Bryan, new to the company wasn't sure of proceedure due to the Benoit situation but still, there needed to be a scapegoat and that was Bryan Danielson.

I am writing this hours before WWE RAW on June 14th airs all over the world, speculation is rife that Danielson will turn up on the show but I think that is all it is and for at least the time being, we have seen the last of Bryan Danielson on WWE TV.
Posted by WrestleFigsUK at 10:58