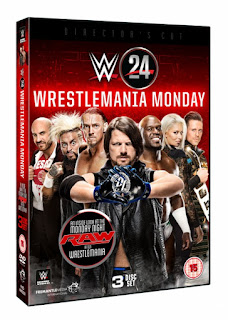 WWE Wrestlemania Monday is a three disc boxset giving fans a behind-the-scenes look into the all important night after Wrestlemania, the “new year’s night” as Enzo Amore calls it in the WWE 24 documentary that forms the hub of this set.

With the documentary taking place in 2016, we get interviews with a cast of superstars, many of them relatively new to the main roster and the events directly after Wrestlemania 32, whilst established stars talk about their experiences.  Everyone speaks positively about the post-Mania Raw, with emphasis on how raucous the crowd are and how big an event that episode of Raw is.

We see big debuts, huge moments and it really does reinforce how important the day after Mania is.  It’s occasionally emotional (especially the speeches) and there are certainly moments where longtime WWE fans will get goosebumps (mostly for the returns).

JBL says it best when he says that, for many fans, this is the last show that the fans will do on the Wrestlemania weekend.  It’s almost like a final blow out for the fans and they want to go out with a bang.  “It’s almost like the Bizarro-world night,” says Sami Zayn, about the audience interaction, and it’s pretty much true.

Watching the NXT guys as they step up to the main roster is a great moment, they all speak highly of their experience and it’s by far the most interesting bit of the documentary.  When Amore and Cass speak about their journey from developmental, the criticisms they received and the work they put in, along with the faith that WWE have in their elevation to Raw, it’s an emotional story and reflection at its finest, especially when it's combined with historical footage of how they looked and performed in the past.

In addition to Amore and Cass, we see Apollo Cruz and Baron Corbin move to the main roster, and the arrival of Luke Gallows and Karl Anderson, reunited with AJ Styles, as they begin their WWE journey and Cesaro as he prepares to return to WWE Raw.  All speak eloquently and openly about their experiences.

Whilst it’s great hearing from the WWE Superstars and experiencing the behind-the-scenes work that goes into making Raw happen as we wait to see new guys debut, there’s very little from the creative aspect as to what makes it the “new year” for the WWE.  Stories aside, it’s a great documentary if you want to experience the fans getting rowdy and watch WWE praise WWE for being WWE.

Clearly, this one documentary - running at 55 minutes - doesn’t fill all three DVDs.

The other two DVDs are full of Raw-After-Wrestlemania moments and, with over thirty years of shows to choose from, there’s some truly great stuff here.

The two discs benefit from being full matches and segments, instead of highlights, but offer no more insight than the commentary - there’s no comments from current day stars, nor is there any context really offered to what we’re watching.

We do see Bull Nakano vs Alundra Blaze from 1995 showing how great women’s wrestling used to be before it descended into titillation before talent.  Thankfully, the other women’s match chosen for this collection is AJ Lee vs Paige from 2014.

From there, it’s a mixed bag of history, with only a couple of years missing.

There’s a handful of championship matches, a few matches and moments that WWE fans may have forgotten about and plenty of stuff that reminds fans just why they continue to watch the product - Amongst others, we see Stone Cold Steve Austin, Vince McMahon, Triple H and Shawn Michaels at their finest on the microphone (and, in Michael’s case, Psycho Sid being… well, Sid), Rick Flair’s retirement speech, Vince McMahon failing to convince Steve Austin, Rock and Cena, Ultimate Warrior’s final appearance, the return of the former 123 Kid, Goldberg, Brock Lesnar, Hogan and the nWo, the ten team battle royale which saw British legend Dave Taylor and William Regal in action, Eddie Guerrero vs Jericho and much, much more.

Hopefully, for more recent fans, they’ll want to revisit moments past to discover the story of some of these classic (and not so classic) moments, especially with the likes of Guerrero, Regal, Blaze, Helms, The Sandman and Tommy Dreamer featured, given how much footage is available on the WWE Network.

The documentary may not hold up to repeat viewings, but the two discs of matches and moments will.