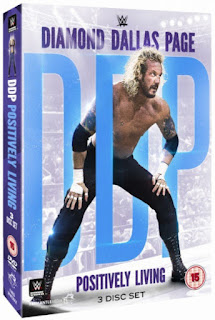 As a 90's teen, slightly WCW obsessed to boot, Diamond Dallas Page holds a very special place in my wrestling memories: alongside Sting, he stood out as a shining beacon of hope for the good guys against the depredations of the burgeoning NWO. So with that in mind, I approached this DVD with a mixture of excitement and reticence – is this going to be a festival of my boyhood hero, or another opportunity for WWE to wave the victor's flag over The Monday Night Wars?

This three-DVD set follows the usual WWE biography format, comprising of a documentary disc and two of supporting clips and matches. Dallas himself introduces and presents his own journey from the off, immediately giving the documentary an original autobiographical feel, particularly as he describes his less-than-perfect childhood, and the traffic accident that stole his early sporting potential.

The novelty is amplified by the topsy-turvy route he took into wrestling. From owning a bar frequented by wrestlers, he ended up cutting a managerial audition tape that was picked up by the diminishing AWA, before joining 'The Dean' Gordon Solie on commentary for the Florida territory. Back into management, he represented the Freebirds in WCW; traditionally, these sort of roles went to ex-wrestlers or those in the twilight of their careers, but DDP's was only just beginning. At the age of 35, he headed to WCW's Power Plant training facility to begin his in-ring career. The vox-pops from Page's peers, present throughout the film, convey the incredulity well at this stage.

Obviously, the documentary's focus continues on Dallas's outings for WCW, which include all of that promotion's major titles as well as the European title in WWE, but with the match selections on the other discs representing this period well, I'll just make a couple of quick points. As I've already mentioned, Dallas was one of the notable few who made any significant heroic stands against the villainously anarchic New World Order stable, and one particular moment at Souled Out. Turning on Scott Hall and Kevin Nash, after accepting their invitation to join as a decoy, he sprints through the adoring crowd in the sort of organic moment that prepends the 'Super' to the beginning of 'Star'. It also struck me how honest Page is about his unsuccessful stint in WWE, considering he tore-up a contractual guarantee from Time-Warner to go there

Following the end to his improbably successful wrestling career, Diamond Dallas Page created a modified form of Yoga that spans physiques and abilities, DDP Yoga. Not only that, but he has used it (and his bottomless positivity) to give both Jake 'The Snake' Roberts and Scott Hall a new chance at life after they looked to have pressed their own personal self-destruct buttons. Whilst this film goes into that in a little detail, The Resurrection of Jake the Snake is recommended viewing on the subject. On that note, and the re-ignited relationship with WWE it provoked, this heart-warming tale reaches it's satisfactory conclusion with Page's sprightly appearance at the age of 59 in The Royal Rumble 2015 and a phone-call from old buddy Triple H to inform him of his impending Hall of Fame inclusion.

The second disc contains some more documentary clips that must have missed the cut, mostly expansions of themes from disc one, but really worth the watch. A lot of humorous stuff, but the best is saved 'til last: the full audition tape DDP sent to Verne Gagne's AWA. It really does have to be seen to be believed.

The match selection for the remainder of disc two, and the entirety of three, ranges from the solidly good (if not in technique or psychology, then for historic perspective) to the excellent. Twenty-one bouts in all on the DVD version, with the first batch focusing on the initial in-ring development of DDP. The first four matches are all tags, with the obviously still-green Dallas mostly teaming with his former managerial charges - the Diamond Exchange or Vegas Connection stables - people to whom he would become inextricably linked throughout his career. The Diamond Studd (Scott Hall), Vinnie Vegas (Kevin Nash) and Scotty Flamingo (Raven) all feature against an array of early-nineties WCW luminaries.

Page also had plenty of singles feuds as he rose up the card during Eric Bischoff's tenure in charge, notably against Johnny B Badd, Randy Savage and Hulk/Hollywood Hogan, as well as United States Championship rivalries with Eddie Guerrero and Curt Hennig. All have a match included on the second DVD; not necessarily the ones I would have picked personally, but stand-up examples nonetheless.

Disc three is a library of DDP at his zenith, opening with two of WCW's most infamous 'celebrity' bouts: with 'Mailman' Malone against Dennis Rodman and Hulk, and with chat-show host Jay Leno versus Hogan again, this time with Bischoff. Unsurprisingly the match involving the sportsmen rather than the TV personalities is the better of the two.

The next pair have their own place in the tapestry of wrestling's past too. As thousands of paying customers missed DDP's Halloween Havoc '98 main event defeat to Goldberg when it over-ran the PPV time, it was repeated the following day on Nitro. At the end of the same episode, DDP got the US title from Bret Hart instead. The championships keep rolling on this DVD set, as this is followed with Page's first World Heavyweight win in an excellent four-corners fight featuring WCW's marquee talent Hollywood Hogan, Ric Flair, Sting and Special Guest Referee, Macho Man Randy Savage.

Another pair from the same night again, as Dallas firstly lost the Big Gold Belt to Sting before a No-DQ four-way (also involving Nash and Goldberg) saw him regain it. DDP's Tag Title victory with Jersey Triad partner Bam Bam Bigelow against Raven and Perry Saturn is the penultimate match, whilst the quite frankly brilliant WrestleMania X8 bout versus 'protégé' Christian represents his post-WCW 'cup of coffee' in the WWE and rounds out the collection.

There were a few matches I was a bit surprised not to see included, but they would bring the tone down somewhat. For better or worse, I expected to see DDP lose his third World title (won the previous night from Jeff Jarrett) to his own tag partner, David Arquette, in one of the greatest farces in history. I thought I might see Dallas's first major [TV] title win against WCW's ill-fated Warrior clone, the Renegade. Maybe the turn on the NWO at Souled Out. Mercifully enough, there was no source material on the Undertaker versus 'Stalker' DDP storyline.

Just like the subject, this DVD set is an uplifting, relentlessly positive thing of joy. We all need a bit of that in our lives.