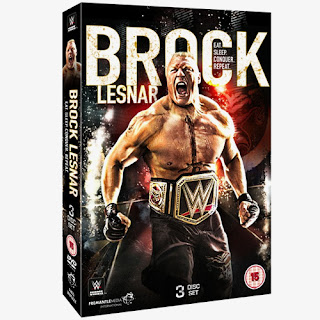 Brock Lesnar is arguably the most physically dominant, and almost certainly the most physically intimidating WWE Superstar of the 21st Century, so it's not surprising that he has been given an up-to-date biographical DVD.  Despite a long sojourn in MMA and Japanese wrestling, Brock's run at the top of the WWE card should give this video plenty of material; those looking for an insight into the home life of the notoriously terse and private Lesnar, I expect will be disappointed.

'...I am Brock Lesnar. What makes me happy? Beating people up, that makes me happy.' The first of the three discs open with the man himself delivering the 'Nuts and Bolts', as he puts it, of being Brock Lesnar and finishing with this ominous, but apt, quote.  This soon gives way to some background on his dominant youth in amateur wrestling as 'The Manster', an appropriate appellation considering his size, and the advantages this gave him with his start in the professional sphere.

Brock Lesnar teams with fellow former collegiate wrestler Shelton Benjamin versus Chris Michaels & Sean Casey in the first match, from WWE developmental territory OVW in October 2000, showing his explosive potential.  Friend and Mentor Mr. Perfect is his opponent from a Non-Televised Match on RAW (Jan 2002) next, and has to use every ounce of sly experience to defeat the young Lesnar.  A couple of tidy matches of rarity to open the DVD and give it some collectable value.

The winner of The King of the Ring is usually tipped as the Next Big Thing in WWE, so it was no surprise that Brock Lesnar beat Rob Van Dam in the final of the 2002 iteration to earn a match against the Rock at SummerSlam for the Undisputed Championship, but first we get a re-match of the final, also for RVD's Intercontinental Championship.  Paul Heyman makes his first appearance as Lesnar's manager, interferes when it looks like his client is going to get pinned, and suffers at the hand of his former employee for his troubles.

Becoming the youngest WWE Champion in the aforementioned Rock bout, he feuded with Kurt Angle and regained the title, that he lost to The Big Show, at WrestleMania XIX.  Angle returned from injury to challenge for the title at SummerSlam 2003 in our fourth match of the disc, a classic bout that for its amateur grappling influence in which Kurt reclaimed his crown.  After Brock became champ for the third time, he defended the title in WWE's brutal first ever Biker Chain Match against The Undertaker at No Mercy 2003. Like most Superstars of the nineties and noughties, he faces an Undertaker acting as the gatekeeper to greatness.

Greatness is not necessarily a barrier to disillusionment though, and Brock's exit feud with Goldberg following his title loss to Eddie Guerrero is dealt with the haste of distaste to round out Disc 1.

Disc two begins with Brock's return in 2012, and his feud with Triple H over his lack of respect and outrageous contract demands; their visceral meeting at SummerSlam 2012 is first up, the match ending with Lesnar breaking Hunter's arm for the second time within a few months, and the subsequent fantastic feud-ender in a Steel Cage at Extreme Rules 2013 upon HHH's return.

With Lesnar's return, his former mouthpiece, Paul Heyman, reprised his role too, abandoning his managerial duties to CM Punk in the process.  The former 'Paul Heyman Guy' meets 'The Beast' in a No Disqualification Match
from SummerSlam 2013 , in which Punk's resilience and determination are the only defence against being rag-dolled by the bigger Beast.

The third Disc starts with Brock's WWE World Heavyweight Championship victory over John Cena at SummerSlam 2014, truncating the offence of Cena with 16 suplexes and two F-5s to utterly rule the match and start his fourth title reign.  The Triple Threat Match for the WWE World Heavyweight Championship at the following Royal Rumble (Brock Lesnar vs. John Cena vs. Seth Rollins) is hard-hitting for a modern-day WWE fight, but Lesnar overcomes a bust rib to make sure he faces Rumble winner Reigns at Wrestlemania XXXI in a bloody encounter. This match spawned the 'Suplex City' catchphrase with Lesnar's opening ringside threats.  Seth Rollins finally cashes in his 'Money in the Bank' contract to interject himself late in the match to opportunistically steal the title with his 'fresh legs'.

Despite running wild on the following RAW when Rollins refused his re-match request, Brock finally gets his wish at Battleground in July, taking Rollins to the, now legendary, Suplex City (13 this time) before Undertaker gets some slight revenge for his Streak loss by costing The Beast the championship in interfering. It sets up one last match between the two historical foes, and this time it is Hell in a Cell. Notably, all three discs finish with Brock beating the Dead-man; however the fact that it is the Undertaker's own 'back yard' of The Cell that gives this a finality that the feud needed, and really underlines the dominance of Lesnar over an athlete that has consistently maintained his position at the top of the WWE Roster.

Each match of this DVD set is interspersed with vignettes of Lesnar (some new, some not) in various interviews, and well compiled highlights of the build-up to each match.  Although that means a lot of recycled footage, WWE have avoided repetition from the 'Here Comes the Pain' DVD in disc One, and used  what they have to build a compelling narrative for his more recent matches.  Brock fans, and those of us that love a 'Big Fight Feel' to a main event, will love this set, but with little new footage collectors and completists might not snap this one up.

Out now in various DVD and BluRay options from www.WWEDVD.co.uk!