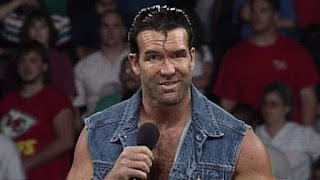 An immortal line in wrestling history, and if you're a fan of WWE then you've more than likely heard it a hundred times or so on DVD or the Network. Well that was now 20 years ago, and it is an anniversary of some note.

Some people may look at the first episode of Nitro, replete with returning Lex Luger and live-event atmosphere, as the first shots in the Monday Night War.  Some may point to the signings of Hogan and Savage as Ted Turner's first great body blows to the then WWF's New Generation, who were struggling to replace the Superstars of the 1980s and now competing for ratings with them.  However, in comparison, these were mere skirmishes, the rumblings of disaffection, the water straining at the dam.  Scott Hall's one-line introduction was wrestling's equivalent of the assassination of Archduke Ferdinand in 1914.  War was not only inevitable, it was here.

Hall himself was on familiar ground, and some loyal stalwarts may have been forgiven for thinking “Yeah, you're the Diamond Studd!” after his previous WCW stint in DDP's Diamond Mine stable, but to the wider wrestling public he appeared in full gimmick as Razor Ramon.  No on-screen caption, no “It's Razor!” from the commentary desk; with the oiled-back hair, the toothpick and familiar grin, we were in no doubt as to who he was.  Most importantly, this didn't feel like a début.

With such blurred lines, in an era when kayfabe was still king, we didn't need the hindsight of 20 years of repetition to know this was going to be huge, ongoing, and industry changing.  Whilst it might not have been “still real to us,” after the McMahon court cases of the early 90's, mostly we were still reliant on dirt-sheets or the promotions themselves for news.  The curtain call incident at Madison Square Garden between the leaving (including Hall) and remaining members of the Kliq, was not common knowledge, nor was their industry influence, but it was still a potential threat to this angle.  Too little respect has been given to the WCW staff and talent for the sell they did on this, it was convincing, with the shock being palpable and making it seem for all the world like a genuine invasion from WWF.  Razor Ramon, the former Intercontinental Champ and star bad guy (pardon the pun) of the New Generation, was standing in a WCW ring with his ego showing for all the world.
Like any War in all time though, no one can tell exactly what will happen once the first shot is fired.  We would undoubtedly have casualties, not least of which would be WCW itself; we would have stunning allegiances in the nWo and DX, both born from the ashes of the Kliq; and most importantly, we would have the fiercest battles in wrestling history. Mostly over ratings...

Get ready for a summer of great 20th anniversaries of the Monday Night War and the birth of the “New World Order of wrestling, Brother!”
Posted by WrestleFigsUK at 13:56