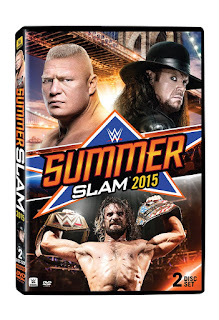 WWE's latest DVD release, SummerSlam 2015, is a pleasantly mixed bag featuring some great action and historic matches. A light helping of celebrity involvement gives the show a big event feel and some incredible marquee matches establish this as second only to WrestleMania in terms of must-see shows of the year.

Jon Stewart more than makes up for the fairly mediocre way he opened the show when he interjects himself into John Cena's match with Seth Rollins later on. To be fair, the opening wasn't all that bad, it just seemed a little clunky and overly long. The addition of Mick Foley to the segment was a welcome and logical way to bring it home and get the show started. Randy Orton vs Sheamus is a match I feel like I've seen too many times in the last five years and the various unrelated chants from the crowd throughout this tells me that much of the audience feels the same way. The match is fine, but it's nothing you haven't seen before. New Day's pre-match promo and continued antics throughout their fatal four way with Lucha Dragons, Prime Time Players and Los Matadores make them one of the more fun and entertaining aspects of the show. The fatal four way itself is really good in terms of fast, excellent action and features a variety of styles, so this is one of the bouts which make this a show that is worth revisiting. All four teams make a really good showing of themselves here and the action and execution bring the previously distracted crowd squarely on board for the rest of the show to come. Dolph Ziggler and Rusev put in a good effort, making up for the silly booking of their rivalry with some great in-ring work. The ringside antics of Lana and Summer Rae are superfluous and unneccesary, while the lack of a satisfying ending hardly makes this one for the ages. Regardless it is a watchable and not entirely throw-away segment. Next up, Neville and guest star Stephen Amell (TV's Arrow, just in case you didn't know) take on Wade Barrett and Stardust. Cody Rhodes is absolutely impeccable as the twisted supervillain character he portrays and thankfully, this is one of the instances of celebrity involvement in wrestling that works well for everyone involved and doesn't come across as too contrived or unnatural. It is a good fit, not just because of the Superhero stylings, but also because Amell is both athletic and a wrestling fan, meaning that he understands it more than most celebrity guests. He is not really awkward or unbelievable in the ring and he certainly put in some work to pull his weight in there, which is great to see. The performances of Neville, Barrett and Rhodes are all outstanding as always too, so this is definitely another strong reason I recommend the DVD, as this is one you will want to revisit. Ryback's Intercontinental title match with Big Show and The Miz is a fair effort from the three, although it is in absolutely no danger of stealing the show at any point. The tag match which follows it pitting Bray Wyatt and Luke Harper against Dean Ambrose and Roman Reigns is heated, exciting and dramatic, making this another favourite on a very decent card.

Seth Rollins vs John Cena, with both the United States and World Heavyweight Championships on the line, is testament to the unquestionable talent of Rollins and to the fact that Cena has really stepped up his game over the last year or so. Genuinely enjoyable throughout, this is a fantastic match which checks all the boxes to make it memorable and a definite keeper. Even people who can't stand John Cena (which usually includes myself) can't deny that this is a great match. The Divas match on SummerSlam is one of the first installments of the 'Divas Revolution' and features the three competing factions of Teams Bella, BAD and PCB. Whatever criticisms there may be regarding the success of the Divas Revolution, the action here is strong and serves as a far superior offering to the rushed filler that has traditionally consituted the women's contributions. Meanwhile, Cesaro vs Kevin Owens is a superb blend of power, technicality and brutality, with a sprinkling of high-flying thrown in for good measure. These guys are just excellent at everything they do and this is definitely one to watch. Lastly, the main event for the show, Brock Lesnar vs The Undertaker, is an epic installment which any fan of both or either performer will want in their collection. The rematch from their infamous WrestleMania 30 bout starts intensely and is explosive throughout. Hard hitting, suspenseful and generally gratifying, this is an excellent main event.

Overall, SummerSlam lives up to the hype of being WWE's second biggest show of the year in a year that included a very strong WrestleMania. The Cena/Rollins and Lesnar/Undertaker bouts alone make this worth owning, but the rest of the card makes this a complete package which will no doubt stand the test of time. Highly recommended.
Posted by WrestleFigsUK at 22:55