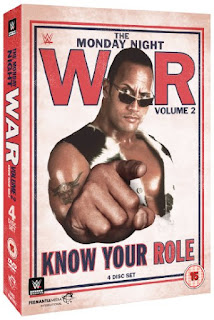 WWE's latest offering, 'The Monday Night War Vol. 2 - Know Your Role' is a must-own title, particularly for those who were fans during professional wrestling's most celebrated period. It also provides a fascinating insight to anyone who has simply heard of the Monday night wars, or even seen the first volume but didn't actually experience it first hand. The ratings war between WCW and WWF with their flagship programs on Monday nights provided some of the best action, creative storylines and innovative characters that the genre has ever produced and the behind-the-scenes news, rumours and tension provided an extra dimension to fans as the explosion of the internet started to permeate pro wrestling like nothing that had ever be seen before. The added drama, alongside both companies churning out some of the best output that fans could hope for, made this perhaps the most memorable and beloved period in pro wrestling history.

While the Monday Night Wars have had a lot of coverage on WWE programming, this collection of documentaries delves into the period to a degree never seen previously, and provides perspectives, stories and experiences that even the most educated fan will find informative, interesting and surprising. Completely candid accounts from the key players in the industry at the time, as well as current stars who were influenced by the wars, give this an incredible depth. The documentaries were first available on the WWE network, but the discs also include some extras which make this even more of a loaded set, courtesy of post-episode analysis for each installment by Eric Bischoff.

Disc one includes episodes on Chris Jericho and the influence of ECW. Disc two then gives us the volume's title episode by analysing the rise and career of The Rock before delving into the Women/Divas role at the time. The third disc looks at the mainstream pop culture elements of the war, with celebrity appearances and the crossover appeal of many top stars before moving on to the rosters, factions and defections which were the cornerstone of the battle between the two industry giants, then an episode dedicated entirely to the backstage faction which held perhaps the most influence, The Kliq. The final disc starts with the self-explanatory title 'Mistakes In The Battlefield', looking at the errors which cost each side (mainly WCW) their ratings supremacy, before we move on to 'The Fall of WCW' and 'Life After Wartime', where we explore the final days of WCW, Vince's purchase of the dying brand and the stars who would later appear on WWE programming.

The set covers the period from every conceivable angle, looking at the characters, promoters, storylines and performers who made the wars so memorable and helped their respective companies reach the heights that they were each able to scale at different times. The talking heads and highlight clips are all well selected and the detail and insight the viewer gets into the on-screen and behind-the-scenes happenings of the era are unparalleled. Highly recommended for any fans of any age.

WIN WWE Beast In The East On DVD thanks to our friends at Freemantle (UK Residents ONLY) - Closes October 5th 2015, details elsewhere on www.wrestlingslasthope.com