Why Story Telling Is Vital to Wrestling By Shaun Nichols 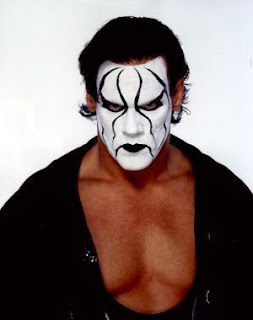 In the past few days I have been trying to explain to a friend why the Sting vs. Hollywood Hogan match at Starrcade 1997 is one worst examples of psychology and booking. In response I was told that it's a good match which lots of people wanted to watch. Also it's listed on the WWE's Starrcade: The Essential Collection at a very respectable fourth place, though I think it's more down to the fact that it's a match featuring two big names and the WWE marketing team felt it couldn't be placed any lower.

Wrestling is a very unique model on the PPV platform, unlike boxing and UFC who succeed mainly on unique individuals (think Floyd Mayweather and Georges St Pierre) that appear maybe 1 or 2 times in the way. These are guys who fans can connect to, it really is unimportant if you want to see win or lose you just have to care.

Wrestling doesn't work that way, wrestling stars are always on TV or on the monthly PPV shows. It is supported through episodic weekly television programming leading to grudges and matches that hopefully fans will pay for. It's not a real contest so it relies on creating an emotional connection that the fans can buy into so they'll spend money either on attending live or ordering the PPV. It works like a good TV drama or a movie blockbuster, something that makes you go out of your away to watch the hero win in the end.

I'm going to compare the Hulk Hogan vs. Sting encounter to the match that topped the WWE Starrcade list which was Ric Flair challenging Vader for the WCW title at Starrcade 1993. I'll explain why one was great example of story telling and the other was terrible.

The Build: Ric Flair had returned to WCW in February 1993 to a tremendous reception but although he had his moments such as a great tag team match with Arn Anderson vs. The Hollywood Blonds and winning the NWA title against Barry Windham. In general it wasn't the great return that many of us had hoped for, he soon dropped the NWA title to Rick Rude in a very dull and boring affair at Fall Brawl 1993. The plan was to phase him out of the main event picture.

The original plan for Starrcade that year was for Sid to beat Vader and become the top star in WCW, but a night in Blackburn which included a fight in a hotel room with Arn Anderson and a pair of scissors and next thing you know Big Sid was let go. A new plan was required.

Ric Flair was really Mr Starrcade, a man right from the first event in 1983 who was dominating the event either defending or challenging for the world title. He was clearly the most obvious choice to take the vacant challenger spot, it also didn't hurt that the show was being held in Charlotte, NC which is Flair's hometown.

To add to the intrigue, the dominant champion was managed by Harley Race who just happened to have lost the NWA title to Ric Flair at the first Starrcade show back in 1983. This was perfect time for Race to get his revenge, to add the icing on the cake a stipulation was added if Ric Flair failed to win the WCW title then he would be forced to retire, the scene had been set.

The Match: This was exactly what it should have been, this wasn't a battle between two equally matched wrestlers. This was a vicious dominate monster trying to end the career of the overmatched company legend. We've all seen Hollywood films where the hero has to come back one more time and defeat all the odds to save the day. It's one of the easiest and most successful plots of all time and most importantly everyone can relate to.

Ric Flair takes a terrible beating and for the vast majority of the match he's on the defensive as Vader completely dominates proceedings. Occasionally Flair makes a comeback and teases that he's about to turn the tide before Vader again takes control. Each time the fans react louder as they implore Flair to defeat the champion. Finally the hero finally gets the win, he's gone through hell and he's got the bruises to show for it but he leaves victorious.

The fans who willed him to victory, cared about his journey and wanted him to get one final run on top and they got the victory they craved and the memorable moment they came to see.

The Aftermath: The emotional journey for the fans was all about Flair's title chase and saving his career, the continuation of the Vader feud didn't reach the same heights. This was followed by a fun feud with Ricky Steamboat which gave a nod to their great series of 1989 but it was clear that WCW was treading water until Hulk Hogan arrival in the summer of 1994. Flair soon turned heel so he could feud with Hogan and to drop the title in the Hulkster's first WCW match.

The Build: There is no denying that the build up for Sting's challenge for the WCW title was really a thing of beauty. Ever since Hogan had turned heel and formed the nWo with Scott Hall and Kevin Nash at Bash at the Beach 1996 PPV they had run roughshod over everyone in WCW.

Well that's not quite correct, they ran roughshod over everyone apart from one man, that man was Sting. The match was planned out for over a year, it had started at Fall Brawl 1996 when the nWo faced Team WCW in the Wargames main event. The nWo claimed that Sting would be their fourth man (well it was a Fake Sting), this caused some mistrust from the other members of the WCW team and although Sting took his part in the main event to show that he had not turned on the promotion. He soon the left the match which led to the nWo team getting the win.

Soon the fun loving Sting character that fans had known for a nearly decade had gone, replaced by a Brandon Lee inspired gimmick based on The Crow film. He started hanging around the rafters and carrying a black baseball bat. While the rest of WCW were getting beaten and embarrassed on a weekly basis, Sting stood on the sidelines biding his time. Eventually he would save WCW, beat Hogan and the nWo and take the WCW title. The build up was excellent, they built it up so slowly and carefully. This was the final battle and the good guys were finally getting their ultimate revenge, right??

The Match: Everything screamed that Sting should just go out and kick Hogan's ass, eventually through the usual nWo shenanigans you'd think Hogan would eventually get control over the match but Sting would make his comeback and pin Hogan clean. How could it be anything else?

Sting was booked like a superhero, he was someone who would not let you down and someone who would defeat the evil Hogan convincingly and take WCW forward. Instead it was Hogan who dominated the match with Sting getting a little bit of offensive in here and there. Fans expected to see Hogan to get his ass kicked but here he was dominating the saviour of WCW.

The farce of the fast count that never was, just to allow Bret Hart 'to save the day' only made Sting look more like a goof and loser than anyone thought was possible. WCW had spent nearly 18 months building up to Sting getting his biggest win, on the biggest WCW show of the year and then when it came down to it they got it horribly wrong.

While Flair in 1993 was playing the role of the underdog going through hell and eventually overcoming the biggest odds, Sting was supposed to be the hero finally saving the town from the evil group who made everyone's lives miserable. He was supposed to be the WCW version of John Wayne or Bruce Lee winning the final standoff to send everyone happy. How could they have got it so wrong?

The Aftermath: This could be seen really as the beginning of WCW's troubles, sure they had drawn the most successful PPV buy-rate in company history with Starrcade 1997. But they had forgotten the golden rule they you have to give the fans what they wanted to see.

They had made the fans wait over a year to see Hogan get what was surely due at the hands of the 'WCW Icon' Sting and failed to deliver it. Even with Bret Hart saving the day, it turned out to be a Dusty finish because the title was held up. Sting did finally win the title at Superbrawl VIII also against Hogan to win the vacant title after Hogan was hit in the head with a spray can by Randy Savage. Again showing that WCW just couldn't bring themselves to have their biggest babyface actually beating Hulk Hogan clean. From a PPV buy-rate perspective, it is interesting to note that Starrcade 1997 drew a rating of 1.9 but the re-match just two months later drew a rating of 1.1 which equates to a drop of over 40%. That's the price you pay for lousy story telling.
Posted by WrestleFigsUK at 09:34