British Boot Camp 2 - Who Will It Be? By Dave Green (@dagreeno) 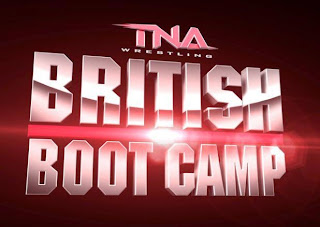 So TNA have just announced the new series of British Bootcamp. The last series saw Brit standouts Marty Scurl, Rockstar Spud and the Blossom Twins take part in an overly scripted reality show to gain a contract with the US company. I say scripted as during the course of a match, Spud went into business for himself at the end of an OVW tag match with Scurl, to which he received a severe bollocking from Al Snow. There is no way that someone that is trying to get a contract with a big company would do this. Despite the lack of actual reality, the series was entertaining and did well on Challenge. Plus the winner Spud is currently one of the only things worth watching on TNA television. So a new series is not a huge surprise, but the information from Dixie Carter's Twitter is that there are 12 wrestlers in consideration. No idea who is in that list, but here's who I believe should being given huge consideration.

1 - Rampage Brown. The big man straight out of Compton (the Leeds one) must be on the list. He's a power house, solid as a technician and has a scary demeanour. Plus (and this is a major reason for why I think he will be included) he is wrestling TNA's own Samoa Joe at PROGRESS Wrestling forthcoming show. Maybe Joe will have some influence on the short list decision.

2 - Nathan Cruz. Although he has recently been on WWE TV as a Rosebud, Cruz may be considered simply on his reputation as a great talker and a great knack for psychology and storytelling. Plus he's still insanely young. And of course he's a pro.

3 - El Ligero. The "native" of Los Sanchez will be a major consideration, being one of the busiest competitors on the scene. He can do it all in the ring, plus the gimmick would do great business for merchandise. The only drawback would be that he would have to talk in the show, something he does not do due to the gimmick.

4 - Kris Travis. When a discussion takes place about Britain's top wrestler, Travis is usually a name brought up. A fantastic look, which would help with the female demographic, great ability and sheer charisma.

5 - Martin Kirby. If we're talking about Travis, we have to consider his regular tag partner. Kirby can sometimes be overlooked when compared to Travis, but having seen his work at Southside as a vicious heel, Kirby could be a dark horse. Plus the drama on the show brought about by tag partners competing for one contract could draw the viewers in.

6 - Nikki Storm. There will inevitably be a female wrestler involved, so Storm is definitely at the top of the list for UK women to be considered. Apart from the obvious in-ring talent and ability to rile a crowd, she has a lot of international experience, having worked for Shimmer and Shine.

7 - Kay Lee Ray. The other lady I would consider in this list due to her unique look and high flying moveset. Very comparable to Lita, which I'm sure TNA will see as a major plus.

8 - Joe Coffey. An absolute beast, his facepainted look in ICW may be compared to Jeff Hardy, but his rough high impact style would be a welcome addition to the roster.

9 - Joe Hendry. Sticking with the Scots for the moment, I believe Hendry is the next big thing. While still in his early years as a wrestler, he's very skilled. But his major selling point is his talking ability and singing gimmick. His immense charisma reminds me of The Rock, so TNA should definitely have this guy on their radar.

10 - Will Ospreay. The Aerial Assasin would of course be thrust straight into the X Division, but even so he would be an easy fit. Plus, from what I've seen from his recent work at PROGRESS when being tortured (watch the free YouTube show to see what I mean), his selling of a storyline is highly realistic.

11 - Noam Dar. He's young. Bloody young. Despite his age, his ability is beyond his years. Despite some recent injury setbacks, he's a jack of all trades in that he has great technical ability, has personality and can do the high flying when needed.

12 - Dave Mastiff. The Bastard from the Black Country may have some things that hold him back appearance wise (and I mean that from a first impressions from a US audience) but as soon as he wrestles, those impressions soon disappear. He would be compared to Samoa Joe, but his experience and no nonsense style would still impress.

So that's my list. I know there's many I haven't listed that could easily be considered - Mark Andrews, The London Riots, T-Bone, Joey Hayes, Wild Boar - just to name a few. A couple I haven't mentioned for a few reasons would be Mark Haskins and Zack Sabre Jr. Haskins was part of TNA many moons ago, but was messed around by them so I doubt he would consider it. Zack is undoubtedly one of the best wrestlers ever to come out of Britain, but his regular work in Japan would probably preclude him from being considered.

Whoever is chosen, I hope that the winner is given a bit more to do than being an assistant to the boss.

Please do let me know who you think should be part of the show.
Posted by WrestleFigsUK at 13:21