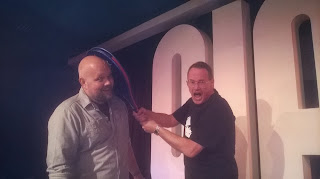 This isn’t exactly a review since I don’t want to go into too much detail about everything that was said during this fine show in the heart of Birmingham – for a start if you want to know you should head over to www.jimcornettelive.co.uk and pre-order the DVDs from all the UK shows, but more importantly there is no way I could do justice to the stories he shared! My Iron Sheik impression is not up to scratch for a start!

But I felt the need to write about the show all the same, I guess it is my little way of saying thank you for the amazing experience.

The whole thing was organised by Alex Shane and the guys from Wrestle Talk TV, for Alex this is the fulfillment of a dream and I for one am very pleased that I was able to share in the outcome. For those that don’t know, the main reason that Cornette has never been to the UK previously is because he seriously hates flying so this is a big deal for him too. A little persuasion from Alex and -likely far more importantly - from Mrs Cornette finally convinced him to take the trip. Alex told me before the show that they are using a different format each night to make each night unique, this is a great idea so each nights DVD is different and people going to more than one show don’t just hear the same things repeatedly – obviously this also means that people are encouraged to buy more DVDs but I can honestly say, based on the Birmingham date they would be well worth it!

As a bit of a mark I opted for the Meet and Greet + Premium Seats, this meant that I had the opportunity to meet Jim before the show and get sme stuff signed as well as getting a couple of photos taken with him. I don’t really like getting my photo taken, I am not exactly a photogenic person so when possible I try to have a bit of fun – with Jim it was easy … hit me with your racket! Which he obliged of course and I have a great pic. Meeting him was a great experience, he seemed genuinely pleased to meet everyone and have a little chat.

I ended up with a front row seat for the show, well worth the extra expense since it meant I wasn’t having to look around or over anybody else, anybody sat behind me was not so fortunate which I always feel a little bad about, especially when I found out the person beyond me was Georgia Smith, the daughter of the British Bulldog!

The show opened with a bit of a warm up from comedian and wrestling fan Chris Brooker, who people should know from the Eros Comedy shows which have bought Mick Foley, William Regal and Nigel McGuiness to stages around the UK. Brooker is funny and as he’ll always say it’s great to be amongst fellow wrestling fans because everyone has the same point of reference.

Joel Ross and Dave Bradshaw are the hosts for the night, I am sure they divide opinions in the wrestling world but Ross in particular seems to be in his element in this set up, and a lot less orange than he does on TV! To be fair, having met him a few times I do actually quite like him and good to see him in the limelight. The format for the show tonight is an intimate Q&A with Joel Ross on stage with Jim and Bradshaw amongst the audience looking for questions – of which there were plenty.

When Cornette hits the stage you can tell straight away that you are in for a good night, he seems full of energy and really gives off the aura that he wants to be there and wants to share his stories.

As I said at the start I am not going to divulge what was said but subjects covered include the Iron Sheik, his relationship with Vince Russo, ribs with Owen Hart and Davey Boy Smith, Mid-South Wrestling, Terry Funk stalking him at the start of his career, training developmental talent in OVW including John Cena, Batista, Randy Orton and the Boogeyman and much much more in and out of wrestling.
Keep a special eye out for the story about the double reverse rib … it had me literally crying with laughter!

With a short intermission Cornette was on stage for about 3 hours but the time flew by, I could easily listen to him for hours on end, his stories are great and really well told and he has strong opinions on a lot of topics.

Overall the show was great and really entertaining and I wold love for him to come back and do more shows, in the mean time I will be ordering the DVDs so I can re-watch this show as well as hearing stories from the other nights too. If you couldn’t make it to any of the shows on this tour I highly recommend that you pick up the DVDs, whether you are a big Cornette fan or not!