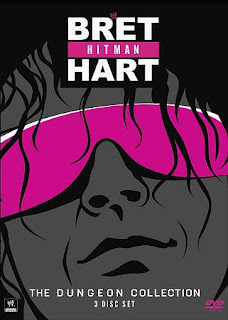 The Dungeon Collection is the latest WWE release for Bret, and is basically a collection of rare matches throughout his career and as such haven't been seen on previous releases. It's a three disc set that covers his career from Stampede all the way through to his ill-fated run in WCW.

Before each match he gives his thoughts on the match or his opponents. Some of these are really interesting such as the 'Hitman' gimmick was a cross between Dynamite Kid and John McEnroe. Or why Owen Hart changed his style for his feud with Bret in 1994. Others are where he just says nice things and others are just really strange with the 'highlight' being where he thinks Ric Flair doesn't understand psychology which is a ludicrous thing to say.

I'll give my thoughts on what I believe are the best things on each DVD and my general thoughts overall.

The best thing on Disc 1 is a singles match against Dynamite Kid from the WWF in September 1985, it really is very good but before the match starts we get Bret saying that Terry Funk called it a master class and Randy Savage compared it to being back in school. It's very good as I say but it's not that great.

Other matches include an intriguing 10 minute draw against Buzz Sawyer from Georgia in 1979 which is a pure wrestling match in front of a crowd that didn't know him at all. Another couple of matches from Stampede against Dynamite Kid and Leo Burke which had great crowd reactions but had cheap finishes which only led to further matches we aren't going to see.

An early match against Mr Perfect from 1989 gives an interesting taste of the classic matches that would follow a couple of years later but were slightly hindered by the fact that WWF fans hadn't seen enough of Mr Perfect to see him a big star.

Another contender for match of the disc, was a very exciting tag match where the Hart Foundation battled The Islanders in front of a really hot crowd in Philadelphia for the Tag Titles in 1987. Where the fans were pretty convinced they were going to see a title change.
Bringing up the rear is a very rare match against Andre The Giant from Milan in 1989, this really was a disappointment as at this point Andre couldn't really do much at all. Though it's pretty funny to hear the Italian crowd chanting for Hulk Hogan.

On paper this looks to be the strongest disc as it features 20 minute matches against Tiger Mask II (Misawa) from the Supercard held at the Tokyo Dome in 1990 and also a long TV main event against Flair where Hart defended the I-C title.

Both of those matches are good but nothing more, the Misawa match is hindered by the fact we don't get any commentary track. Also Miswa's style just wasn't suited to playing the Tiger Mask character so it's not particularly exciting to watch in large parts. The fans react to that as it's only until in the closing few minutes that they show any real interest.

The Flair match from November 1991 just didn't click. I don't think that the WWF really knew how to push Flair in his first run. He was cutting great promos saying he was the best wrestler and they booked him to where he had to cheat or rely on interference to beat any average midcarder.

A more interesting match supported by an inspired Bobby Heenan on commentary was against The Undertaker in January 1992. At this point The Undertaker was all about the gimmick and was aided considerably by a sterling effort by Paul Bearer. This was about Bret doing battle against the unstoppable monster and was very good from a storyline point.

Ending disc 2 was another match from Milan but this time against Bam Bam Bigelow, this another good but not great match but is interesting to see that the Italian fans see Bret as a major singles star by this point.

The strongest of the discs in my opinion, it starts out with the best match on the entire set and a very pleasant surprise. Bret defending the WWF title against Diesel at King of the Ring 1994 PPV, not even the awful commentary including ex-NFL star Art Donovan (who had no idea what was happening or who the wrestlers were) could ruin it.

Special mention must go to the great work by Shawn Michaels on the outside, there can't be much funnier sights than a rather tubby Jim Neidhart desperately trying to chase a smirking HBK. This was a fantastic effort by Bret and one of Kevin Nash's all time best matches. Even with the slightly unsatisfying DQ finish this is still comfortably over ****.

Also we get a very entertaining 10 minute streetfight against Owen just before Mania XI which is by the numbers but still great due to the brothers talent. An entertaining match against Jean Pierre Lafitte who had an awful pirate gimmick and a match based on a stupid story of Bret having his jacket stolen and he wanted it back.

Also very good was a match from South Africa against Steve Austin in from September 1996, this was when he was on his hiatus from the company though he officially returned also against Austin at that year's Survivor Series. The match starts pretty slowly features lots of good basic wrestling and an amusing bit of commentary by Owen Hart who tries to convince Jim Ross that his brother has now come around to his way of thinking.

The set closes out with two of Bret's matches in WCW, the first was against Booker T from Nitro in January 1999 and is a very fun encounter with Booker getting plenty of his offence in and Bret playing crafty heel to perfection.
Closing out is his match against Sting from the Mayhem PPV in a WCW Title tournament semi final, what's clear is that no-one really cared. We had a completely pointless run-in by Lex Luger that ended up being ignored. I think it's only included to remind fans how dreadful WCW was in the final 18 months.

I actually had really high hopes for this set and there are some pretty enjoyable matches on there but I actually expected a little bit more. It isn't as good as the first Bret Hart set of 'The Best There Is, The Best There Was, The Best There Ever Will Be'.
Saying that there is plenty to enjoy just don't expect it to be the best WWE release because it really isn't. The top five matches I would say are as follows.