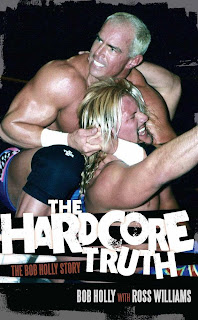 Well who would have thought that I will be encouraging you all to go out and buy Bob's book? Well I am, it's a great book and is far better than anyone would have expected. Normally you'll only buy autobiographies or biographies of people you really liked, now I wasn't a big Bob Holly fan. I didn't particularly dislike him it's just that I didn't see him as anything more than a midcard geek who it didn't matter all that much if you watched his stuff or not.

Most people have the view of Bob as something of a bully or a dickhead and he didn't deserve to get further in his career than he did. Bob doesn't shy away from the accusation that he's a bully infact he discusses it on page one, when he states that he actually hates bullies and gives a story relating to being on the receiving end from his elder brother and his friends. He also explains how he rectified the situation, even as a young boy he didn't stand any messing.

One of the good points in the book is the style of it, it moves quickly and never becomes tiresome or boring to read. A snapshot of Bob's early life is that he had a great mother, won some bar fights which his partner at the time didn't like as it involved staying out all night. He also got involved in motocross and car racing which are two things I don't care about at all but as I said the style and the personable stories he tells means that you don't want to miss it.

His early wrestling stories involve Jerry Jarrett who gets ripped to shreds, then secondly Jim Cornette who he had tons of respect for and liked but didn't feel like he could risk leaving a well paid welding job a second time to wrestle full time. He also tells a story about wrestling Ric Flair in his very early days and was surprised how much Ric gave him in the match but how he got pissed when Flair totally ignored him even when Bob tried to thank him for the match as they went behind the curtain. He also explains who advised him to leave NWA/WCW when he was getting $200 a match working as a jobber and why they were right.

It's the stories though when he gets to the WWF that will be the most interesting chapters to most fans, now I won't go through everything but will select just a few particular highlights that hopefully you'll find interesting.

The first happened during an early trip to Europe, when he fell victim to someone ripping up his food card so he couldn't get anything to eat. This happened at least 3 times until Randy Savage found out and let Bob know that it was Shawn & the Kliq messing with him. At the point Bob threatened to use bolt cutters to cut Shawn's fingers off and knock out Kevin Nash and Scott Hall there and then. Needless to say they didn't mess with him any further.

Although he states that he found Shawn to a complete asshole, he doesn't stop him being able to praise him and he says that Shawn is the best wrestler in the world. You would think that he would side with Bret over Montreal, but you would be wrong. He liked Bret, but said he lost a lot of respect for Bret when he saw the 'Wrestling with Shadows' documentary because in his view, wrestling is a fake sport and if your the champion then your a fake champion and your job is losing the belt when the company wants you to and when they want you to do it. Just as the previous champion did for you. He also thinks that Bret lost more respect by only giving Vince a blackeye.

He doesn't think that having Bret leave to go to WCW was going to affect the 'Monday Night Wars' because in his view which ever side had Steve Austin was going to win. Another really funny story involves an angle that Bob and Crash Holly did with Mae Young and Fabulous Moolah, Bob was concerned about hitting Mae with a clothesline as he didn't want to hurt her but that as he worked a stiff style it could easily happen. Mae told him that if he didn't hit the move as he usually did then she would kick his ass in front of everyone. After the angle he went to check that she was ok only to be told 'That's how you lay a clothesline in, right there' as she left with a smile. This is why he gets pissed at people who complain that he's too stiff to work with, when a 77 year old lady was just fine with it.

He also spends time discussing his two major wrestling injuries which occurred at the hands of Brock Lesnar and Kurt Angle.

Both were complete accidents, the Lesnar injury which basically led to a broken neck was Bob's fault although he explains that Brock felt really bad but when he got healthy again he found out that Brock didn't want to work with him again and explains the reasons for it and they are probably different to what you would think.

The Angle injury, a broken forearm was caused by a mistimed moonsault by Kurt where he didn't get as far across as Bob expected him to. What's pretty funny is Angle did a missed moonsault spot in every match but Bob talked him into hitting it so people didn't just assume he'd miss. That's karma for you.

Other stories include what Mick Foley did to him that was so serious that Foley appeared in front of the wrestling court. Who prosecuted and who barely defended him. Why his World Title match against Brock Lesnar became the shortest World Title match in WWF history.

He coves the Matt Cappotelli incident which only happened a couple of days after his injury with Brock before he went for surgery. The story goes that Bob took liberties with Matt and actually beat him up, Bob's side of the story was that he was doing the spot where he was kicking him in the corner and he told Matt to stay still but he wouldn't and was flopping and trying to get away which made things a lot worse. He also thinks that this made Matt look really bad and that wrestling was not for him.

He tells some great stories about some of the divas, including if he thought they were any good. There were a couple but not necessarily the ones you might think of. A time he did an angle where he spanked a diva so hard it left his handprint on her ass and how she reacted to it. Funniest though is probably the set of circumstances that led to the firing of Linda Miles, a winner of Tough Enough Series 2.

Arguably the best story though covers the 'Brawl For All' fiasco, including who Bob felt would have won it easily had he not got injured training for it. Which WWF superstar backed out at the last minute which allowed Bob to get into the tournament. The resentment that the locker room felt towards Jim Ross for saying how Steve Williams would kick everyone's ass in the tournament. When the realisation set in that the only way Steve wouldn't win the tournament was if someone knocked him out.

The 'Brawl for All' fight in which Bob won a bet with The Undertaker, how Steve Williams reacted when he did lose and how everyone else reacted when they found out that he had already been paid the winners purse of $100,000 before it had even started. Bob also discusses how Jim Ross got his revenge on Bart Gunn by arranging the boxing match with Butterbean at Wrestlemania, knowing that Bart had no chance to win. He also gives his thoughts on if the WWF were right to not bring the concept back and if and how his performance in it affected how the company saw him.

The Hardcore Truth is a fantastic book and I wholeheartedly encourage you all to buy, rather it will change your opinion on Bob or not at least you'll get read some great stories and he does come across as a pretty honest and straight forward character. Highly recommended.
Posted by WrestleFigsUK at 08:16