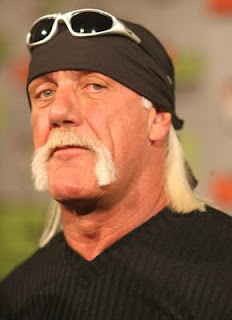 "Ok, what just happened? Just watched this week's Impact, and frankly my head hurts more than Rob (steroid)"Freak" Terry's after that chair shot cut him hardway! Has Russo got ADHD or something?
I's lost track of wrestling after the Attitude era finished. Partly thru lack of funds to pay for Sky, but also as I found WWE getting a bit dull. Finding TNA by accident on Bravo, seeing the 6 sided ring and the likes of Styles and Joe (before they were Ric Flair Jnr and kidnapped by fat ninjas respectively) it was different, fast-paced and seemed all about the wrestling. But pretty much as soon as Hogan & Pals arrived it's all gone down hill fast. I'm not just going to bash Hogan blindly, but even his biggest fans can see something's gone wrong. TNA has more talented wrestlers than WWE, actually has proper tag teams- (unlike WWE who just throw 2 midcarders together randomly when the need arises) and has a far better Women's division. Even up to Final Resolution, they were putting on top-notch shows. Then, soon as Hogan took over, it's like they took Russo off the Ritalin and just let him go nuts.
But all is not lost. TNA CAN turn around their 0.6. Some of the ideas are simple, and doubtless not new. Some of you will disagree, but then, since when have fans ever been wholly in agreement about anything? Hopefully, in a bit of a 'series' I can share with you some of my ideas for TNA, and it'll at least spark some debate."

I can add/remove bits if you like. I don't want to sound like I know it all, just thought it might spark some debate, and if people want to hate on me that's fine.
Will welcome your comments.
Thanks a lot
Posted by WrestleFigsUK at 20:12