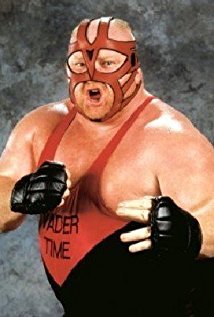 As you'll no doubt have read, Leon White, better known to wrestling fans as Vader, passed away on Monday evening. Vader meant a lot of different things to many different sets of wrestling fans.

He will be remembered without a doubt, as one of Pro Wrestling's best ever Super Heavyweights, with the strength of a Bull Elephant and an agility quite unbelievable for a man of his size.

His fearsome offence and intimidating in ring demeanour left many fans with a real belief that Vader was a man to be feared.

I'll readily admit I'm no authority on Vader's time in Japan, but I consider myself a fan, so I present to you a small cross section of what I feel made Vader so special.

I've picked 5 matches, in no particular order, all of which are available to watch on WWE Network.

While not exactly a hidden gem, this match plays co-main event to an excellent 10-Man Tag match, which is the match most people remember.

A benefactor of circumstance, Vader stepped into this program in the place of an injured Ahmed Johnson, Vader and The Undertaker went to war in front of one of the hottest crowds you'll ever see. 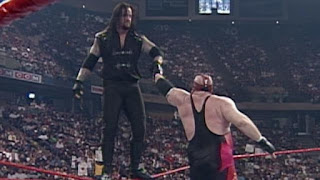 This match illustrates one of my favourite things about Vader, that being his willingness to take bumps like a man half his size. In this contest he takes a lovely Chokeslam as well as a Tombstone Piledriver and does his very best to make all of The Undertaker's offence look as good as it possibly can.

They do attempt a Tombstone reversal spot that goes a bit wrong, but in attempting the move, the pair show a desire to put on a good match that would put most of the so-called monsters of the ring to shame.

This match is what many people consider to be Vader's best match, and is probably one of the best WCW main events I have ever seen.

The stipulation for this match was Vader's Title vs Flair's Career, the high stakes add to an already compelling contest. The dynamic for this match is very much Vader's power in opposition to Flair's experience and ring savvy. 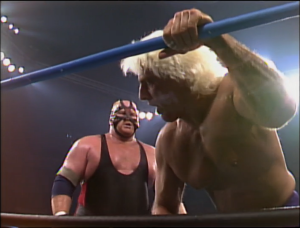 Flair takes a lot of big bumps in this match and the end appears to be nigh when Vader attempts his now legendary Moonsault, but after a big miss on Vader's part, Ric Flair comes back with a real vengeance, logically attacking the big man's legs and nullifying his offence.

Harley Race in the corner of Vader is a very entertaining addition to this match and it's not long before he becomes physically involved.

The finish of this match feels real, with the experienced man having just a few more tricks up his sleeve, and taking an opportunity when he see's it.

This match shows Vader's versatility, Ric Flair's regained confidence, and both men working together to put on an outstanding match.

This match was booked somewhat hastily after Shawn Michaels vacated the WWF Championship following the Royal Rumble of that year. The four participants in this match were the last four in the Rumble match, and the winner would become the new WWF Champion.

This match is a four way elimination match, and feels like one of the very first "Attitude Era" style main events, and we get to see Vader as part of a very interesting main event scene, as the last vestiges of the New Generation are moving on, and in a few short months, the wrestling business as we know it would be altered forever.

During this match, Vader is bloodied when The Undertaker manages to kick a chair into his face, and while the match was good until then, it really seems to kick up into another gear once Vader removes his mask to reveal the damage done. 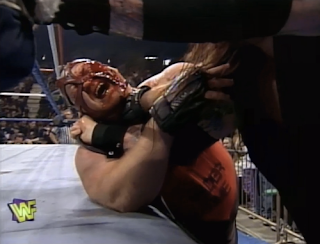 This match shows Vader outperforming and exceeding expectations. At this point in time, his run in the WWF had reached his peak, and after a brief flirtation with the main event scene, he appeared in main event's sporadically. On paper, Vader was the rank outsider in this match, but after watching, I cant imagine this match without him.

Confession time for me, I'm not a fan of Sting. I don't enjoy his matches and I think he's somewhat overrated, that being said, this match with Vader could be one of his very best.

While not as good as Vader's match with Flair one year later, Sting does an excellent job of staying alive after absorbing almost every Vader can throw at him.

This is the second match for both men on this night, and they would go on to be involved in a Battle Royale straight after. 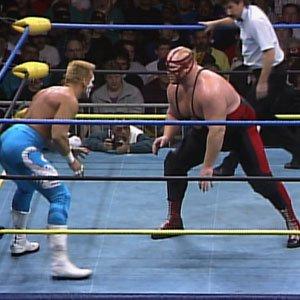 The reason I included this match is because I absolutely adore the finishing sequence, that see's Vader encouraged to go up to the top by Harley Race after connecting on a middle rope splash, only for Sting to catch his top rope attempt in mid air, and turn it into a mammoth Powerslam. This spot was imitated many times after this , but this is probably the best version of it you will ever see.

Contrary to my previous entry, I am a massive Mick Foley fan, and this match with Vader, to me, is the stuff of legends.

This match follows on from the amnesia angle that WCW tried to execute when Mick Foley sustained a horrid concussion from a Vader Powerbomb on the arena floor a few months earlier, this was a story so good, it would take a special kind of incompetence to mess it up.

While WCW's creative may not have done this story justice, the two performer's put on a hell of a show, as they beat each other senseless for nearly 16 minutes.

This match is contested under Texas Death Match rules, whereby after a pinfall, and a 30 second rest period, the man who cannot make to his feet at the count of ten is declared the loser.

Both men give as good as they get as they brawl in the ring, on the ramp and meander through the makeshift graveyard erected upon the stage, blood flows and both men throw caution to the wind. 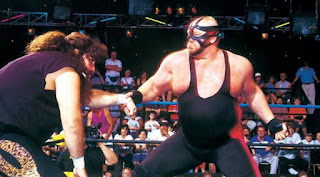 This match is here because when I was young, I believed Vader to be exceedingly dangerous, and me and my brother speculated that while wrestling may be a work, here was a guy who took real pleasure in hurting people. Once I had grown up, I knew this of course wasn't the case and in most of these matches I've selected, Vader sacrifices himself willingly for his opponent, and if a ten year old me believed that his moves hurt, well, that was the point, wasn't it?


This was by no means an exhaustive run through of Vader's best matches, instead these were just a few that come to mind when I think of him at his very best. Vader's influence can be seen all over pro wrestling in 2018.

When you see Jonah Rock attempt his frog splash, he does so, thanks in part to Vader, who didn't listen when old-timers told him what he should or shouldn't be doing in the ring.

Embracing your abilities, as opposed to giving in to what people expect from you is one of the core elements of modern wrestling, and few did that as well as Vader.