A Woman's World: The Evolution of Womens Wrestling By Nathan K. Major 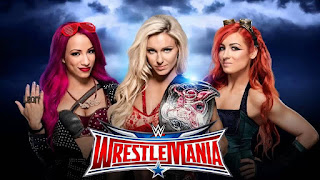 Many fans will get bleary eyed about how great the Attitude Era was, the big matches, the celebrities and the outlandish goings on are what sticks in the mind from that period of time, but not many people tend to remember the negatives about this time. Say what you want about the current product lacking a certain something, but I think we're spoiled when it comes to in-ring talent. The mid-card is filled with talented wrestlers, while others wait in the wings in NXT. The main glaring difference from the Attitude Era to now however, is this: The treatment of women.

Now, I may not be the best qualified person to speak of the injustices women face each day for daring to be different and in charge of themselves, but I am a big believer in Equality for all, and if that means I'm called a feminist then so be it, as if such a thing would be an insult. Besides, I don't tread on this sensitive topic alone, as I'm assisted on this look through history by Christy from @wrestlingsexism who is the fountain of knowledge and wisdom one needs in these situations (you can also check out Christy's blog here: www.wrestlingsexism.blogspot.nl)

Way back when, your only exposure to women in the wrestling world was WWE, and it's questionable, at best, portrayal of women, yes they had a title, but it seemed like they couldn't be on screen without Jerry Lawler (don't get me started) yelling: “Puppies!” or something along those lines, and matches would consist of slapping, hair-pulling or spanking, because women, am I right lads? The women would be paraded around in various costumes like dress your own love dolls and not one of them was treat like you know, a human being with thoughts and emotions, no, to the WWE they were just bimbo's, in the tightest costume their seamstress could make.

And then there was the piece de resistance, the Bra and Panties match, can you imagine any other workplace where this would happen? Imagine for a moment you work in an office and your boss tells Sandra from accounts that she has to work in her underwear the next day, there'd be uproar! Recently Sasha Banks came out and mentioned this on RAW, and how women had evolved, this caused former writer Vince Russo to critisise Banks' as according to Russo they 'drew money' was this justification for having these matches? Christy thinks not: “No, absolutely not. That shows you consider money more important than respecting women and treating them like human beings.”

You're probably now thinking: “It wasn't all bad, what about Trish Stratus and Lita?” Ah yes, Lita, let's explore her background shall we? The first thing that springs to mind is her story with Kane and Gene Snitsky, anyone remember that little chestnut? Of course you do, it was that time that WWE thought that a miscarriage was a great story. Long story short, Kane forcibly marries Lita, oh did I forget to mention that he WON Lita's marriage? Yes, won as if she was a prize, anyhow, Lita eventually comes round to married life and they conceive a Demon baby, until one fateful night Snitsky hits Kane with a chair and he falls on his pregnant wife. Ugh. This makes me uncomfortable just typing about it. Snitsky would go on to say: “It wasn't his fault” and punt a baby doll into the crowd, Lita however would go without getting comeuppance, I assume because WWE just saw her as a prop that can be used and then forgotten about.

That wasn't all that poor Lita had to put up with though. In 2005 Lita had an affair with Edge, while she was in a relationship with Matt Hardy, an affair that went public online and got Matt fired for airing his dirty laundry in public. Obviously to cheat on someone is an awful thing to do, but she wasn't the first person to do it, and why for the rest of her run was she seen as somewhat of a 'whore' while Edge's 'Rated R Superstar' gimmick was supposed to be positive, he went on to be an 11 time World Champion and his retirement was met with emotion and a celebration of his career. Lita? Not so much. “When she retired from WWE, after years of putting her body on the line and being disrespected by fans and WWE alike, her send-off was being mocked and abused by Cryme Tyme. This was WWE's way of thanking one of their best and most popular women's wrestlers ever. With abuse and disrespect. And that just solidified my belief that WWE doesn't respect women. It had me in tears.” says Christy. The WWE thought it appropriate to send Lita off, by having Cryme Time (don't even mention the racial undertones of THAT gimmick) sell her panties to the audience. Yikes WWE, way to have tact, you afforded Trish a great send-off less than a year earlier, why do this to Lita?

It isn't even the more modern crowd that can land on the wrong side of offensive when it comes to women wrestling, the older guys, with their old school views unsurprisingly land themselves on the wrong side of internet debate, for instance, the always controversial Jim Cornette recently stated that it was 'unconvincing' for women to wrestle men as well as insinuating that women were weaker than men and this would be why, what does our sexism consultant Christy have to say about this? “I find it silly. Mostly because wrestling is, sorry to say, 'fake' and we're happy to accept smaller guys beating huge, big, tough guys, yet women beating men is a bridge too far? If it's written well, anything can be believable. If you start judging on what you think is believable, then you need to do this for all wrestlers and limit interaction between those in different weight classes, etc. Not just the women. You need to write it well, but that's the case for everything.”

It seems someone else disagrees with you there Corny. Even if you think about it though we shouldn't need to be told this, there are certain people who could beat the crap out of you no matter whether they were a man or a woman, would you say that Ronda Rousey or Amanda Nunes couldn't beat up say someone like, Kofi Kingston? Even in the wrestling world, would you tell Awesome Kong that she was weaker than you because she's a woman, if you would you're braver, or stupider than I.
Cornette however, doesn't take issue with Women's Wrestling, there are some old guys who are, take for instance, Greg Valentine, who a few years back said that women should be, and I quote: “Women should be at home, cooking, barefoot and pregnant.” Wow Greg wait to enter the 21st Century. What does Christy think? “He clearly doesn't belong in this century and I refuse to give his ancient, ridiculous opinions any serious thought. I don't have the energy to deal with men like that, really.” Not an entirely surprising response, but in all honesty what did he expect people to think? Did he expect society to see the ill of it's ways and set itself back another century or two? At what point does a wrestler, and not a very interesting one at that, think that it';s justifiable to say stuff like that?

Anyway, at least we're through the woods now right? Right? Well, not quite. While presentation of women has come on leaps and bounds in recent years, we still have some ways to go, take for example the recent Enzo Amore/Big Cass feud with Rusev and Lana. Don't get me wrong I like Enzo, he's a charismatic guy, I don't like what he's had written for him, the sort of half-sexual misogynistic comments that somehow make him a face, yet make Lana and Rusev heels because they're 'foreign'. “I have much more of an issue with the way Lana was treated there than Rusev. WWE seems to like writing their faces attack the heel's wife/girlfriend while feuding with the heel and it's so unnecessary. And almost all of these women only went through this for the sake of a man's storyline. It's not even their story. They don't come out the hero, or the victor. They facilitate a man's evolution. As if they're props. Just as Lana was the prop used for Enzo to feud with Rusev. Just as Eve was used for Kane and Cena to feud. To make Cena a bigger hero who could 'save the damsel'. That whole Enzo/Lana/Rusev angle still makes me angry.” More strong comments there from Christy, There's much to think about in this feud, and it just seems like women are given these sort of storylines by a writing staff and upper management made up of: “Mostly white, straight, middle-aged yes-men.” As Christy put it to me, this seems to be a problem widespread in all media that women aren't well written because they're frequently not written by women either.

Still, no-one can deny the progress made in-ring in the last few years, we've seen women headline PPVs, and weekly TV broadcasts, participate in matches that were previously for the men only, we've seen the hideously outdated term 'diva' phased out and the Women's Championship reinstated. “I'm not sure how much of it is willing and what is forced by society, but they treat their women so, so much better. Fewer degrading matches, more time given, more distinct characters and better chances to have excellent matches.” Says Christy of recent developments, but where do we go from here? Well I'd say the first big step should be more women in positions of power and creative (who don't have the surname McMahon) and the lessening of use of degrading relationship stories, I'd say that'd be the first step in a bold new direction.