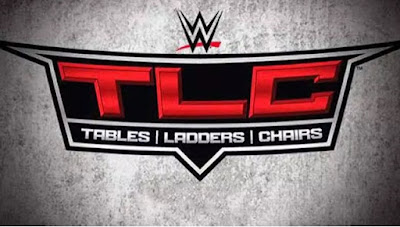 Welcome to the WWE's final PPV extravaganza of the year, hailing from Boston and hosted by the usual crew of Michael Cole, JBL and Jerry Lawler. To open up the show is a nice video package building up the main event of Roman Reigns challenging Sheamus for the WWE title, with all the back story of Reign's getting screwed and Sheamus's short lived 5:15 T-shirt although you'll spot a surprising number in the crowd.

First up we have the 3 Way for the tag titles in a Ladder match with the New Day defending against the Usos and the Lucha Dragons, the New Day do a promo to open things up which is a bit hit and miss before Xavier heads to the commentary table to add some much needed quality.

The match itself is a very entertaining stunt fest where everybody gets to show off their talent but with the clear highlight being the Slammy Award winning move when Kalisto hit the Solida Del Sol off the ladder near the end. Finish comes when Xavier realises that he can use his trombone in more ways than one.

Sadly match quality takes a bit of a hit when Ryback faces Rusev, it's clear that Ryback tries really hard and his missile dropkick is surprisingly good but also that both the company and the fans have given up on him.

It's great to see Rusev re-united with Lana as they are much better off together, the finish came when Ryback for the second straight time was distracted by Lana faking an injury leading to him getting distracted and shortly ending up in the Accolade for the loss.

Out of the concept matches on the TLC show, it's the Chairs match which is probably the hardest to work. Alberto Del Rio and Jack Swagger tried hard in this US title match but the match was hurt by everyone knowing that Swagger had no chance of winning. The fans did enjoy shouting 'We The People' though, to no surprise Del Rio successfully retained following the double stomp onto several chairs.

Onto the Tables match where The Wyatt Family take on Team Extreme (The Dudleys, Tommy Dreamer and Rhyno) this was fought on a elimination basis where all members of one team had to be put through a table. Personally I felt this was terribly out of place, Dreamer especially comes across as someone from a different era and the commentators really shouldn't be harping on about ECW Originals as the company died in early 2001.

The match did have some cool spots, mainly from Luke Harper and the match did ensure that both Bray Wyatt and Braun Strowman came across as monsters but the fans were not given the chance to see Bubba making a grand comeback as his foolish attempt to set a table on fire was both unbelievable but also led directly to his doom.

Kevin Owens was next up defending his I-C title against the man who eliminated from the WWE Title tournament at the Survivor Series, that being Dean Ambrose. These two worked really well together and had the fans reacting to pretty much everything that they did. We also saw a title change as Dean managed to reverse the pop up Powerbomb for the win.

Another title match followed but they didn't have the fans attention was Charlotte defending the Diva's Title against Paige. This was mainly because the WWE decided that Charlotte is much better as a heel (that's true) but forgot that Paige has done nothing to make anyone actually like her. The result was that the fans had no idea who to cheer for.

Charlotte also needs to stop doing all her dad's moves as it makes her come across as a cartoon caricature, she did though retain after Ric's interference distracted Paige for the finish.

Main event time as Sheamus defends the WWE title against Reigns, Reigns is still not being embraced by the fans as they still see him as someone the company is forcing upon them. They aren't too keen on Sheamus either. On the plus side both guys try really hard and work some hard hitting and creative spots in. Reigns looks to have his redemption before Sheamus's League of Nations friends (Del Rio and Rusev) swing the tide in the champion's favour.

This is the setting for the best thing on the show when Roman Reigns cannot hide his frustrations anymore and beats the hell out of Sheamus, Del Rio and Rusev. That leads to Triple H and Stephanie of all people coming out to try and calm him down. The fans are definitely excited to see the showdown between Hunter and Reigns and are delighted to see the leader of the Authority left laying on a broken commentary table.

Roman leaves to 'Thank You Roman' chants and the WWE direction of 2016 has been set, it's Roman Reigns vs. Triple H.

The DVD also features as a special feature the PPV kickoff match where Sacha Banks beat Becky Lynch thanks to yet another distraction finish, a standard TV match and nothing like their classic NXT match.
You can pre-order the DVD or Blu Ray over at http://wwedvd.co.uk it will be released on February 22nd 2016