Another One Gone Too Soon - R.I.P. 'Rowdy' Roddy Piper 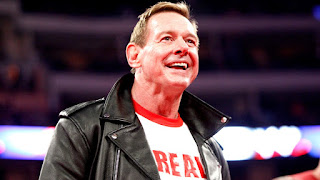 So sad to discover 'Rowdy' Roddy Piper has passed away aged 61. Roddy it seems, died from a heart attack at his home on Friday afternoon.

I first saw Piper wrestling in 1990, I'll never forget the feud with Bad News Brown which saw him paint himself half black for their match at Wrestle Mania VI.

As 1990 was the year I got into wrestling I went back to find earlier stuff on video from the world of pro wrestling and I came across a tape released by Pro Wrestling Illustrated I believe covering various matches from the NWA and it featured a brutal match from Starrcade 83 which saw Piper take on Greg Valentine in a dog collar match.

Piper would go in and out of wrestling over the years but what really put him on the map was main eventing the first ever Wrestle Mania where he teamed with 'Mr Wonderful' Paul Orndorff to take on Hulk Hogan & Mr. T with Muhammed Ali at ringside. The following year saw Piper face Mr. T in a boxing match at Wrestle Mania 2.

Piper's charisma saw him land a role in the John Carpenter movie 'They Live' in 1988.

Piper had a career in wrestling that took him all over but he is more well-known for his time in the WWF where in 1992 he won his one and only title in the promotion, the Intercontinental, when he defeated The Mountie (Jacques Rougeau) this led onto one of Piper's most memorable matches as he took on Bret 'Hitman' Hart at Wrestle Mania VIII (FULL match HERE).

At Wrestle Mania XII in 1996 Piper had a match billed as a 'Back Lot Brawl' with Goldust which would see them re-inact the infamous car chase that took place when the police were chasing OJ Simpson down the L.A. freeways.

There is so much I have left out of this article about Piper, he had had such a hugely entertaining career and in 2005 he was inducted into the WWE's Hall Of Fame  and it was a long time friend and former in-ring nemesis Ric Flair who inducted him.

In more recent times Piper had been  hosting his own podcast 'Piper's Pit' which was very good indeed. He had some issues with the podcast which was documented elsewhere but while it was around, it was one of the better ones hosted by current/former pro wrestlers

After surviving cancer it makes it even more sad that Piper has past away, he'll be remebered as one of the greatest villains to ever grace the squared circle and he is a bonified hall of famer and will be missed in the world by his family I am sure of that and by us the fans, we will remember him fondly.