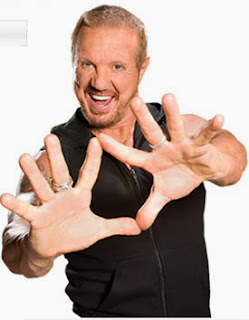 Just home from “BANG! An evening with Diamond Dallas Page” at The Glee Club in Birmingham. The tour has been organised by Eros Comedy, the guys behind bringing Mick Foleys stand up to the UK as well as William Regal and Nigel McGuiness. The shows I have been to previously have been great, they are always fun and fan friendly, you can tell that they are ran by people that care about it. Pricing is good too and if you pay the extra for the meet and greet you get real value. It was also teased tonight that they have their next tour lined up for July with a Hall of Fame talent.

But before DDP hit the stage, the host for the night was Jim Smallman, stand up comic and the man behind PROGRESS Wrestling. I originally saw him on the “undercard” on Mick Foley's first stand up tour. He really is a funny guy, his brief introduction included quite a lot of banter with the crowd and some funny stories from Progress – somewhere I still really want to go it just keeps selling out too fast! (I wonder how many cheap plugs would help me?) But, seriously if you like comedy and you like wrestling you should certainly check him out on Twitter @jimsmallman or go to www.jimsmallman.com

Now it’s time for the man himself - kind of a mix of a motivational talk, wrestling road stories, the story of his development within the wrestling business as well as the truly remarkable work he has done with Jake “The Snake” Roberts and Scott Hall. The set up was that the first half of the show was DDP telling the story of his life, from an unhappy beginning up until along with some funny anecdotes along the way. Page is really captivating as a speaker and for me personally I was really sucked in by his story – which was certainly not the traditional way into the business. He definitely comes across as a fan of the business first and foremost which is what helped him break in in the first place, and his personal drive and motivation that made it all possible is amazing. Page also offers insight into his relationships with Roberts and Hall and why he has dedicated so much time to them in the last year or so. DDP was quite frank about his experiences in the business but never came across like he had an axe to grind and didn’t get caught up with shooting on anybody, it would seem that he had, and still has, very good relationships with the people he met in the business.

After a short interval the second half of the show saw DDP taking questions from the audience covering topics including Kanyon, David Arquette, The Rock, the three tiered cage, injuries and a brilliant cookie story involving Steve Austin. Page finished with an emotional story bookending the resurrection of Jake “The Snake” from being ready to give up on everything and “waking up every morning and hating God for still being alive” to making his return to Monday Night Raw and getting his spot in the Hall of Fame.

Then to end the night there was the meet and greet portion. Everyone who had booked for it got their photo taken with DDP while holding the big gold WCW Heavyweight Championship belt and the opportunity to get stuff signed. Page seems like a genuinely nice guy taking a bit of time to talk to everyone not just whizzing everyone through. I even got a DDP hug to really top off a great evening.
Overall this was a really fun night and I can’t help but feel inspired at the end of it, maybe because it is something I was looking for or maybe because Page is that good at what he is doing now with DDP Yoga. His success is reward for his relentless work ethic and personal motivation. I guess my review is my way of saying thanks to DDP as well as to Eros Comedy for organising it and to Jim Smallman for hosting the evening (One last cheap plug)