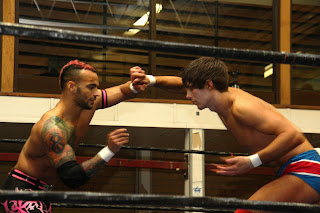 On a bitterly cold March evening IPW provided a fantastic night of wrestling in the intimate White Oak Leisure Centre in Swanley. We were greeted by our ring announcer for the evening, the lovely  Justine Cager - making her announcing debut from WrestleTalk TV.

Our first match of the evening was for the IPW tag team championships.  First to the ring were the challengers The Wild Cats, cashing in their Royale Rewards win from last year, followed by the defending champions Project Ego. Ego took the upper hand early in the bout and used all their years of tag team experience to double team the challengers and try and gain the advantage. But the challengers worked their way back into the match with some great high flying manoeuvres which led to Lion Kid being able to set up Kris Travis for a Swanton bomb for his partner Dark Panther. This win enabled IPW to crown their new tag team champions The Wild Cats!

Up next was an IPW debut with Scottish sensation Grado taking on Mark Haskins. Haskins made his way to the ring with a toilet roll and proceeded to tell everyone in attendance about his “man flu”. Grado then made his way to the ring and repeated his Twitter request from earlier in the week to get a photo with Haskins who rather impolitely denied this by slapping the phone out of Grado’s hand. Haskins took control early in the bout and impressed Grado with his chain wrestling moves, so much so that Grado asked if he could show him how to do it himself!  We were then treated to Grado’s attempts at a kip up which he eventually succeeded in doing with referee Chris Roberts and Haskins help.  After some back and forth action Haskins stopped the bout to take his temperature and then used the foreign object to gain the advantage.  Haskins eventually hit the Made In Japan for the win. Great debut for Grado against veteran Haskins and a very entertaining match.

Next up was the highly anticipated match between Dragon Gate USA Ricochet and Zack Sabre Jr, and this one did not disappoint.  The two traded mat wrestling moves early in the bout much to the delight of the IPW faithful on hand.  This was a technical master class and after 21 minutes of top class grappling Sabre was able to apply his modified armbar for the submission victory. In a great show of sportsmanship the two shook hands after the bell and I hope we can see a rematch soon.

After the interval we kicked off with a bonus match with “Special Edition” Joseph Conners, one half of The Predators, making his IPW debut against Andras. Conners made quick work of the Hungarian with the rear naked choke after 4 minutes of action, impressive debut for Conners.

Next up was a huge 8 man tag team grudge match between The Firm of Sha Samuels and Big Paul teaming with the London Riots to face The Bhangra Knights and Paul Robinson. This one got off to a flying start with Bhangra and Riots continuing their hard-hitting feud which has raged on for months now. The Samuels team gained the upper hand when they isolated the newest member of the Knights, Ateeque Baig, and dished out some brutal punishment keeping him from making the tag. Eventually he was able to tag in the fresh Robinson who gained the advantage for his team before being hit with a bone jarring mid air spear. The Knights then came back into the fray and were able to down London Riots’ Williams for Robinson to hit an enormous top rope leg drop for the pinfall after 15 minutes of action.

Now on to the main event  - the 30 man over the top rope Battle Royale.  First entrant was London Riots’ James Davis with Zack Sabre Jr at number two and when the countdown ended it was bad news for Sabre as next in was London Riots’ Rob Williams! After the inevitable double teaming, relief came in the form of Bhangra Knight Ateeque Baig. The bodies followed thick and fast and we even had an appearance from Super Mario and a mysterious masked man doing the Gangnam Style dance!! Project Ego double teamed Grado and then raided his bum bag and did unspeakable things with his toothbrush! Sakura Lily eliminated Kris Travis before himself being eliminated by Martin Kirby. We were eventually left with a final three of Big Paul, Mark Haskins and Joel Masters. Haskins and Paul teamed up on Joel but the big man survived and then eliminated Big Paul leaving Haskins and Joel one-on-one. Haskins managed to haul Masters over the rope but when he went for the high knee to eliminate him, Joel was able to avoid it and eliminated Haskins for the big win at the 30 minute mark. Joel immediately announced that as a result of his win he wanted to face Iestyn Rees who has been avoiding him for many months. Hopefully this match will take place at Royal Rewards 2013 in May.  As a result of Zack Sabre eliminating Sha Samuels he is now in line for a title shot at the show in May, as are the London Riots who will face the Wild Cats for the IPW tag titles. All this and an appearance from Nigel McGuiness are already making this look like we have another fabulous IPW night of wrestling in store!