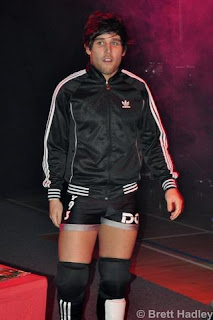 Hello one and all I’m back for the third edition of A Bird’s Eye View here for Wrestling’s Last Hope. When I started here a few editions ago I stated that not all my columns would be WWE related and that I’d get down to some BritWres stuff in the future. I think it’s time to get down to that BritWres stuff here in edition three which will be all about Southside Wrestling Entertainment.

So Saturday morning I get a phone call from Dale Mills saying I’m booked for commentary for SWE! Not the Saturday I was expecting at all but I was more than happy to lend a helping voice if I was needed. I got my gear and waited for my lift, and then it was off to Stevenage for a night of Wrestling.

The venue was a good one, it was nice and big with a great entrance way, a long entrance way. I kinda felt sorry for Old Man Mills having to go back and forth from the Commentary table to the ring after every match; needless to say he was knackered after the first two matches!

On to the show which opened up with a one fall to a finish four way match which featured the SWE Speed King Champion “Party” Marty Scurll, Bengal Tiger, the undefeated Ego Dragon and the debuting Kid Fite. The title was not on the line in this match though as Scurll has a massive four way title defence on Sunday October 28th against Martin Kirby, Robbie X and Johnathan Gresham which will be a fantastic four way. All four guys in this match worked really, really well together and it was a great way to open the SWE Raw Deal show. At the end though it was Ego Dragon who continued his undefeated streak on this night. Dragon will face El Ligero in a huge Mask vs. Mask match on the October 28th show, it’ll be the ending of a rivalry that has lasted around a year. The build up has been excellent and the Mask vs. Mask match will no doubt be even better!

The Southside versus House Of Pain rivalry continued right before match number two as “The Man With The Golden Tongue” Harvey Dale interrupted SWE’s Dale Mills. Harvey informed Mills that he would be handling all H.O.P. announcing duties tonight before bringing out SWE Tag Team Champions Joseph Conners and Paul Malen, The Predators. For me Conners and Malen are one of if not the best Tag Teams in the country, every time I see them they just seem to get better and better. Their opponents on the show were The Dunne Brothers, Pete and Damien, who were making their Southside debut. This was my first time seeing the Dunne Brothers in action and I must say that I was really impressed with them and the match as a whole was fantastic. Anyone who has read my previous columns may know that I’m a huge fan of Tag Team Wrestling and this was one of the best tag team matches I’ve seen live in a while. Just like the match before it this was a non-title match as Conners and Malen are defending the belts against CZW starts OI4K (Jake and Dave Crist) at the show this Sunday. Conners and Malen won the match with their Trophy Kill finishing move on Pete Dunne. Excellent match.

The next match saw T-Bone return to SWE for the first time in four months. For those that don’t know T-Bone was attacked by the H.O.P crew four months ago and it put Bone out of action so this was Bone’s return to the ring, his opponent was reluctant House Of Pain member Max Angelus. Also for those that don’t know Angelus is the Southside Money In The Bank holder and can cash it in on any champion at any time. As this was official House Of Pain business “The Man With The Golden Tongue” Harvey Dale was ringside as extra insurance for Max. This match showed the heat between Southside and House Of Pain well but it didn’t last long as the rest of team H.O.P. hit the ring to once again attack Bone, this caused a disqualification. The confrontation ended with Bone standing tall in the ring staring down the H.O.P. crew. It was a heated ending to the match and fuelled the rivalry between the two companies even more.

There was just one more match remaining before intermission and that saw El Ligero go one on one with The Star Attraction Mark Haskins. This match could certainly be a main event match in any promotion in my opinion and they both went all out this night to put on an amazing match. This was one of those matches that I don’t believe anyone wanted to end, even the crowd seemed to be split right down the middle, one minute cheering Haskins, one minute cheering Ligero, it was crazy. It also seemed to be back and forth the entire match with equal amount of offense too; nobody could predict who was going to win. It was Ego Dragon though that cost Ligero the match after a stomp to the head, which Haskins followed up with Made In Japan for the three. It’s also worth noting that Haskins apologized to Ligero after the match for winning with Dragon’s help as he didn’t want or see Dragon getting involved. Fantastic matchup between two of the UK’s best.

After intermission we had a singles match between Robbie X and Noam Dar. Robbie hasn’t won a match in Southside in sixteen months; his last win was in June of 2011 over Keith Myatt. Noam Dar was also on a little bit of a losing streak in Southside too, losing to both Marty Scurll and Davey Richards so both were looking for big wins in this match. Both Noam and Robbie are two of the brightest young talents in this country and although Noam won the match with his Knee Bar (The Dar Bar?) submission move both came away from this match looking like huge stars. Robbie has another huge match this Sunday and could end that losing streak in a massive way by winning the Speed King title in that huge four way match.

All through the night I was thinking to myself ‘how does one prepare to commentate on a Mad Man Manson match?’ and now I have the thought of ‘how does one write about a Mad Man Manson match?’ Well, I’ll give it a go! On this night Triple M fought RJ Singh in a... match? Can we call it a match? I have no idea, RJ and Manson did go one on one in something though and it was comedy from the get go with Manson killing wrestling at every opportunity. Manson got the win over Singh after a springboard crossbody from the second rope, yes folks, no Haduken’s here, Manson won with a wrestling move!

After Manson’s tomfoolery, shenanigans, craziness and downright madness it was on to the none title main event between Southside Heavyweight Champion, the Heavyweight House Of Pain Stixx and Martin Kirby. At least we thought it was a non-title main event until right before the match Dale Mills said he had word that the title was on the line! So Southside’s Raw Deal main event was now a title match between Champion Stixx and Challenger Kirby. What a main event it was too, it was amazingly heated and emotional; the fans firmly behind Kirby who they wanted to bring the title back home to Southside. It always makes a match that little bit better when the crowd are as hot as they were for this one, Stixx and Kirby are both phenomenal wrestlers in my opinion and the match that they had showed that. Near fall after near fall from Kirby got the fans on the edge of their seats. They all wanted to see Stixx and his manager Harvey Dale go back to House Of Pain with their tails between their legs but it was not to be as Kirby went face first in to Stixx’s steal chain and lost the match after a three count. House Of Pain prevailed over Southside again, much to the chagrin of the fans, Kirby, Dale Mills and the Southside management. After the match though T-Bone hit the ring to clean House (of Pain) and assist Kirby. Sunday October 28th Southside Heavyweight title, Stixx defends the gold against the former champion and the only man to ever beat him in Southside, T-Bone.

I didn’t intend for this column to be a review of the show but once I got started I couldn’t really help it. My overall thoughts on the show are that it was a good solid show from top to bottom with not a bad match in sight. The feud between Southside and House Of Pain is one of the most heated feuds I’ve seen in BritWres for a good long time and that does nothing but positive things for not only Southside and H.O.P. but for BritWres too. Overall a fantastic debut in Stevenage for Southside with Raw Deal and I think everyone would agree with that.

Southside has another show this Sunday night at The Priory Centre in St. Neots and it’ll be their Second Anniversary show. It’ll feature a mask vs. mask match with El Ligero taking on Ego Dragon; at the end of that match someone will lose their mask. The Southside Tag Team titles are on the line as The Predators make their first defence against the CZW Tag Team of OI4K. Current CZW Champion Masada will face Southside Money In The Bank holder Max Angelus in possibly the biggest match of Max’s career. In a special CZW Guest Match Greg Excellent takes on DJ Hyde in one on one action. In what will no doubt be a six star match up Mad Man Manson will go one on one with old friend and rival the Invisible Man for only a second time in their highly decorated careers. Marty Scurll will defend his Southside Speed King Championship in a massive four way match against Martin Kirby, Robbie X and Johnathan Gresham. Mark Haskins returns to Southside to go one on one with CZW star Alex Colon and finally the Southside Heavyweight title will be on the line as The Heavyweight House Of Pain Stixx who is sure to have Harvey Dale in tow will defend against the only man to ever beat him in Southside, the former Southside Heavyweight Champion T-Bone in which is to surely be a super heated match up.

So there we go, that’s my review and my thoughts on SWE’s Raw Deal show, I hope you all enjoyed. Before I sign off though, back by popular demand (By its originator DDM) its random thought time!

Will be at T.I.W. this Friday in Mansfield, be sure to come and watch the show...

So Eve is the only person in the world that doesn’t know Teddy Long stole her iPad...

Busy couple of weeks ahead and I can’t wait, must not kidnap AJ Lee at the signing though...

Big thanks to Ben Auld and Dale Mills for the Southside gig this week, really enjoyed it...!

Be sure to add me on facebook and follow me on Twitter @Glencyclopedia, have a good week folks, I’ll be back with more column goodness next week!

(Thanks to Brett Hadley for the picture of Noam Dar)
Posted by Stu Rodgers at 12:42